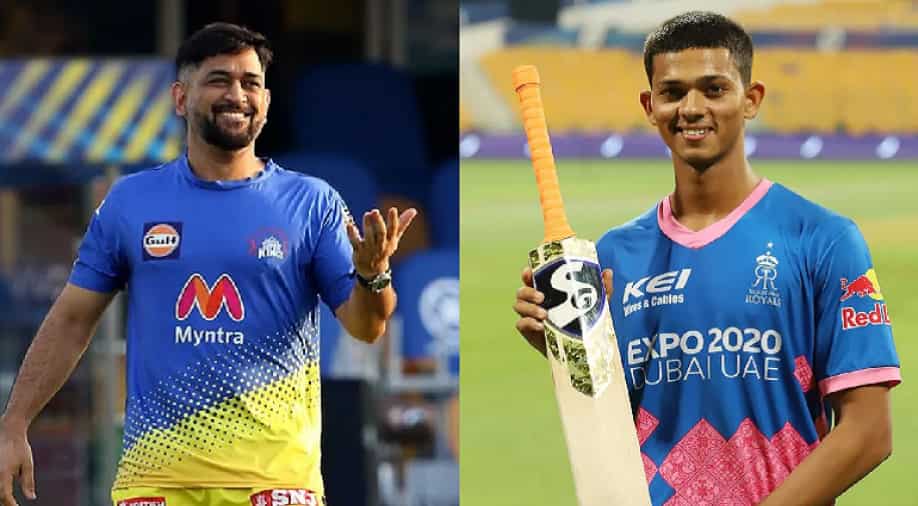 Rajasthan Royals (RR) youngster Yashasvi Jaiswal got MS Dhoni's autograph on his bat after smashing a sensational half-century against CSK in IPL 2021 on Saturday.

Rajasthan Royals (RR) pulled off a stunning victory against Chennai Super Kings (CSK) in IPL 2021 on Saturday to remain alive in the race for playoffs with 10 points from 12 matches so far this season. Riding on half-centuries from young Yashasvi Jaiswal and Shivam Dube, RR chased down the target of 190 runs with as many as 15 balls to spare against CSK in Abu Dhabi.

It was a brilliant batting performance from the Royals, who were far from favourites after CSK posted a strong total of 189 runs, batting first on a slowish surface in Abu Dhabi. However, Jaiswal combined with his opening partner Evin Lewis to get his team off to a flyer. The young opener slammed 50 off just 21 balls laced with six fours and three sixes.

It was a sensational knock from Jaiswal, who posted a 77-run stand for the first wicket with Lewis (27 off 12 balls). The two openers took the CSK bowlers to the cleaners from the word go and set up a comfortable victory for their side. Jaiswal was elated to receive CSK skipper MS Dhoni's autograph on his bat after the match.

Jaiswal, who regards Dhoni as one of his idols, got his autograph on the same bat with which he played a match-winning knock against CSK on Saturday. In a video shared by IPL's official website, Jaiswal revealed he was happy to get his bat signed by Dhoni.

Also Read: MS Dhoni knows Suresh Raina isn't performing well but he wouldn't replace him with someone else: Virender Sehwag

“I was thinking about looking at the wicket first, but we were chasing 190, I knew the wicket must be good. I was just looking at capitalising on the loose balls and giving my team a good start so that we are able to chase 190,” Jaiswal told Shivam Dube and Anuj Rawat in a video shared by IPL's official site post the match.

“I took signature of MS Dhoni on my bat after the match, I am really happy,” he added.

After Jaiswal's departure in the run-chase, RR skipper Sanju Samson, who scored 28 off 24 balls, combined with Dube (64 not out) to add an 89-run stand for the third wicket. Dube and Glenn Phillips (14) then took the team over the line comfortably to ensure RR remain in the race for playoffs this season.