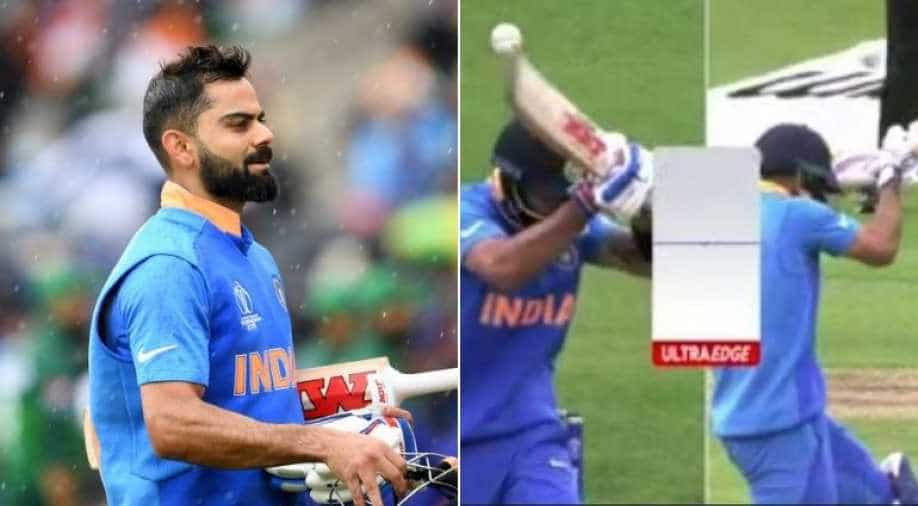 The Indian captain had scored 77 runs in just 65 balls studded with seven boundaries but looked good for more when Aamir bounced him to claim his wicket as Pakitan skipper Safaraz took the "catch".

Virat Kohli walked after Mohammad Amir appealed for caught behind but television cameras later showed that the Indian captain wasn't out as the ball which went over his helmet had missed the willow by a distance.

As Virat himself saw the footage being played on the big screen at Manchester, the Indian captain looked bemused but a few minutes later was seen losing his temper in the players dressing room. Virat who is not known as a "walker" perhaps missed a trick in the heat of the moment just after he came out to bat after the rain interruption.

The Indian captain had scored 77 runs in just 65 balls studded with seven boundaries but looked good for more when Amir bounced him to claim his wicket as Pakistan skipper Safaraz Ahmed took the "catch".

BREAKING: @imVkohli finally encounters someone who can get him out - himself. pic.twitter.com/TXFFE3sVJC

Rohit and KL Rahul, who hit 57 in 78 balls with three boundaries and two sixes, brought up a century stand to peg back Pakistan who won the toss and put India into bat.

Rahul finally fell with India on 136 but Rohit and Virat came together to keep the momentum as the two stitched a 98-run partnership. Indian all-rounder Hardik Pandya played a cameo(26) in 19 balls with two boundaries and a six as the Indian batsmen made merry at Manchester.

India finally finished their innings at 336/7 in 50 overs.