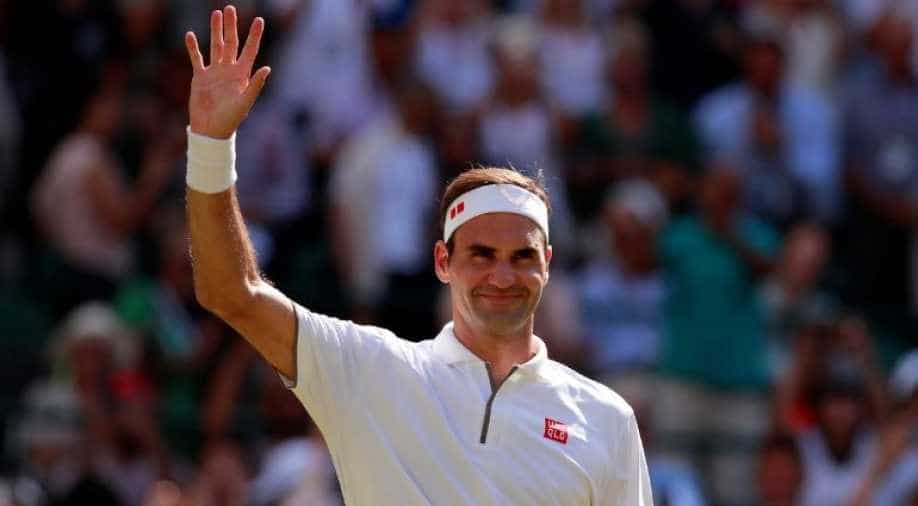 Federer has never lost a Grand Slam match to somebody as low as Clarke in the rankings, though Clarke put up a brave fight in the second set

With his usual level of ruthlessness and near effortless efficiency, Roger Federer dashed home hopes of an outlandish upset at Wimbledon by easing into the third round with a straight-sets victory over Britain's Jay Clarke on Thursday.

There were just enough of the usual flourishes and moments of brilliance to suggest the Swiss is firmly on track to challenge for a ninth Wimbledon title, but he faced limited real resistance in the 6-1, 7-6(3), 6-2 win over the world number 169.

Federer had never lost a Grand Slam match to somebody as low as Clarke in the rankings and, despite the Briton putting up a brave fight in the second set, the huge gulf in class ultimately ensured the Swiss never had to get out of second gear.

Clarke was clearly jittery although Federer was not in the mood to check before going in for the kill.

"I sensed he was a bit nervous in the beginning with his double-faults in the first game... That's the only way I can tell if he's nervous. I'm not going to put my hand on his chest and check is the pulse higher or not, I can't do that," he joked.

Federer has played enough matches at Wimbledon to know he only needs to get the job done in the early rounds and if the 20-year-old Clarke takes one lesson from his experience on Court One, it will be the killer instinct of the game's elite.

Clarke had two opportunities to break the Federer serve in the first set and they went begging, while Federer had five breakpoints in the match and, with cold-blooded ruthlessness, took four of them.

"I think that's the biggest thing about playing those guys, how they handle certain situations, what shots they choose, how they save breakpoints," said Clarke, who was only playing his third match at Wimbledon.

"There are so many things you can learn. You don't actually need to ask a lot of questions ... I think I had two breakpoints ... and he aced me in different directions. Maybe I'll learn a bit better for the next time," Clarke said.

Chasing a 21st Grand Slam title, Federer blasted out of the blocks, winning the opening set in double quick time, before Clarke got a foothold in the contest, holding serve throughout the second set to force a tiebreak.

The home crowd began to sense the beginnings of an upset when Clarke secured a mini-break on the Federer serve, but it was a fleeting advantage, with the Swiss taking the set and breaking early in the third.

Clarke handed Federer match point with a double fault and he wrapped up the contest when the Briton sent a backhand wide.

"I really enjoyed myself. The tank is full. I came here with a lot of confidence, the first few matches haven't been very taxing physically. You try to win your matches regardless of the score if you win them in straights that's better," Federer said.

The Swiss will next face Frenchman Lucas Pouille after he overcame compatriot Gregoire Barrere.