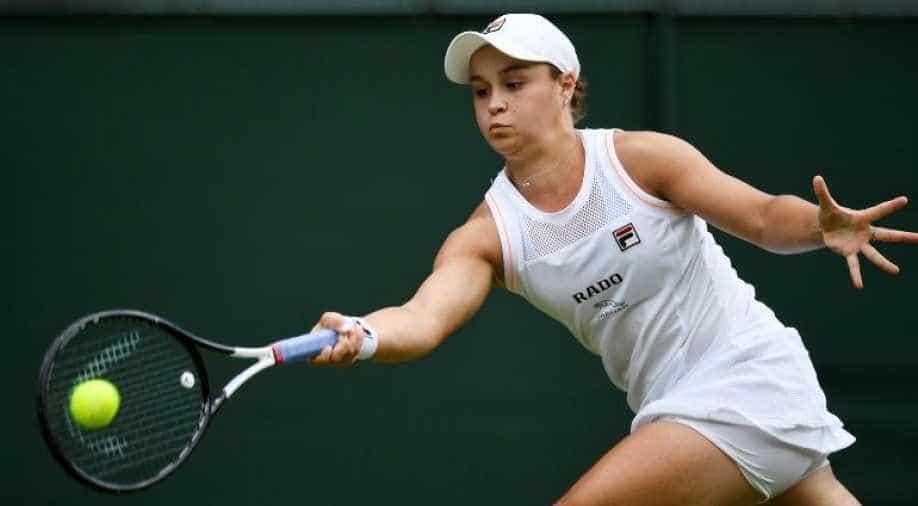 Barty and Zheng had played each other three times previously, with Barty winning on each occasion and, apart from a brief wobble in the first set when she allowed the Chinese to claw back from 3-0 down to 3-3, it was plain sailing

If being world number one brings the burden of pressure and expectation then somebody should tell Ash Barty, who began her first Grand Slam at the summit of the women's game at Wimbledon on Tuesday and loved every minute of it.

Being at the top of the women's rankings has become something of a poisoned chalice in recent years, with the position changing hands 10 times since the start of 2017 between eight different occupants.

The most recent holder before Barty, Naomi Osaka, admitted the pressure of being number one had caused headaches and fatigue while the stress was "way more" than she could have imagined.

The extent to which her game had plummeted from the heights of her two Grand Slam title successes at the US and Australian Opens was laid bare when she exited Wimbledon meekly in the first round on Monday.

It was refreshing, therefore, to hear Barty embrace the so-called "burden" of being the world's best player with such enthusiasm as she waltzed into the second round at the All England Club with a 6-4, 6-2 win over China's Zheng Saisai.

"I think for me it's a little bit irrelevant," she said about being number one.

"The only pressure I have is what I put on myself, making sure I'm doing all the right things, preparing in the right way. Ultimately when we play our matches, we go out there and enjoy it ... just play each match as it comes. There's certainly no extra stresses on any match," Barty said.

Her express-train run to the top of the women's game certainly showed no sign of slowing on Court One as Zheng was dispatched comfortably.

The Australian, who followed up her French Open triumph last month by winning in Birmingham, sealed a 13th straight win in a brisk hour and 16 minutes, battling through the first set before easing through the second.

Barty has never been past the third round at Wimbledon, but her game is well-suited to the slick grass courts and she looks well-placed to challenge for a second Grand Slam title.

The 23-year-old will certainly have to overcome tougher challenges than the 43rd-ranked Zheng if she is to lift the trophy next Saturday.

She could face defending champion Angelique Kerber or seven-times winner Serena Williams in the quarter-finals while twice champion Petra Kvitova is a potential obstacle in the semi-final.

Zheng, however, was no match for the Australian who started the 2017 season ranked 271 in singles and whose remarkable career has also included a successful sabbatical playing cricket for Brisbane Heat in the Big Bash League.

Barty and Zheng had played each other three times previously, with Barty winning on each occasion and, apart from a brief wobble in the first set when she allowed the Chinese to claw back from 3-0 down to 3-3, it was plain sailing.

She broke early in the second set and again in the eighth game to wrap up victory, volleying the winner before saluting a warmly appreciative crowd.