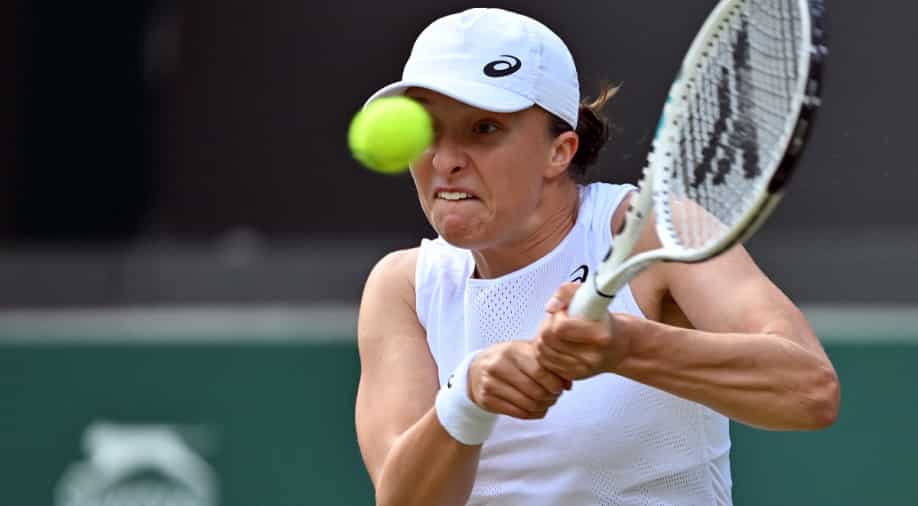 World no.1 Iga Swiatek's unbeaten run came to an end on Saturday (July 02) after a shocking defeat against France`s Alize Cornet in the 3rd round at Wimbledon 2022.

The Iga Swiatek winning machine broke down on a lush Wimbledon lawn on Saturday as the world number one and red-hot favourite for the title was comprehensively beaten 6-4 6-2 by France`s Alize Cornet. There was a sense of disbelief on Court One as Poland`s Swiatek, who had won her last 37 matches over four months, was outplayed by the unseeded 32-year-old.

Even when she fought back from losing the first three games of the match and then also led 2-0 at the start of the second set, top seed Swiatek`s usual confidence was missing. The statistics said it all, with 33 errors off Swiatek`s racket compared to seven by her opponent.

While Swiatek, who dropped a set to lucky loser Lesley Pattinama Kerkhove in the previous round, was clearly not firing, nothing should be taken away from Cornet who played a near-perfect match.

Cornet is playing in her 62nd successive major, equalling Ai Sugiyama`s record, and will face unseeded Australian Ajla Tomljanovic in a bid to reach her second Grand Slam quarter-final this year, having never achieved that before. She completed her shock victory in one hour 32 minutes, reeling off the last six games as Swiatek disintegrated.

Also Read: Coco Gauff bows out of Wimbledon 2022 after defeat against Amanda Anisimova

"It reminds me of when I beat Serena (Williams) here eight years ago on the same court; maybe this court is a lucky charm," said a beaming Cornet, who is ranked 37th in the world.

"I live for this kind of match. It really drives me. I knew I could do it and I had belief because maybe Iga feels a little less comfortable on grass than other surfaces." Williams was also world number one when beaten by Cornet in 2014 and the Frenchwoman rose to the occasion again this time.

She won the opening three games and then held off a Swiatek fightback to pocket the opening set. Swiatek looked as though she had gained some momentum when she went 2-0 ahead in the second set but a forehand into the sidelines gave Cornet a break point.

Cornet converted when an off-balance backhand deceived Swiatek and landed on the baseline and from that moment on it was one-way traffic.

"I feel like maybe I`m like a good wine; in France a good wine always ages well, that`s what`s happened to me" Cornet said of her return to form this year.

"It`s unreal -- I`m playing one of the best seasons of my career, I feel great on the court. I`m still so motivated and I still have the fire in me."