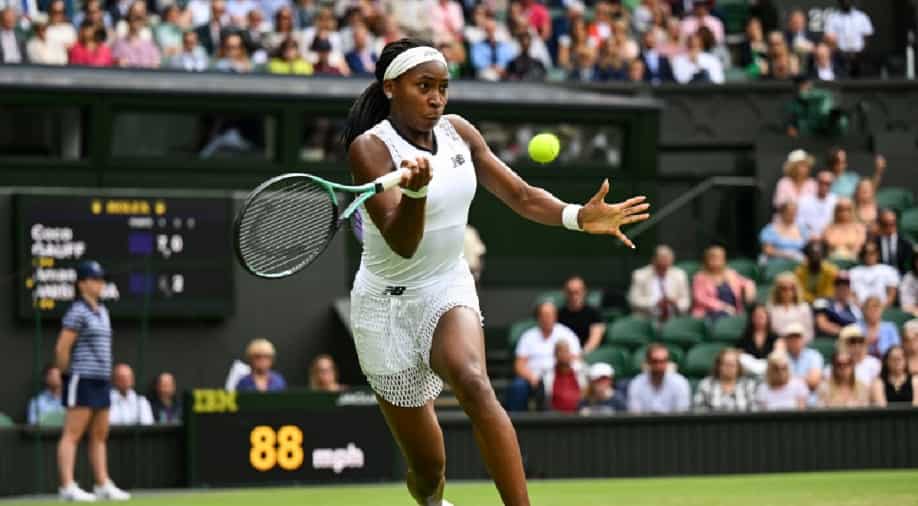 Teenage sensation Coco Gauff lost against Amanda Anisimova in an all-American clash to bow out from Wimbledon 2022 on Saturday.

Coco Gauff`s Wimbledon challenge came unstuck in the third round on Saturday when she was beaten by familiar foe Amanda Anisimova 6-7(4) 6-2 6-1 in an all-American showdown. The two Florida-based players had made their way through the junior ranks at the same time, with Anisimova thrashing Gauff to win the U.S. Open junior title in 2017.

Hence when the duo walked on to Centre Court on the sixth day of these championships, they were already all too familiar with each other`s strengths and weaknesses.

Yet during the opening exchanges, 11th seed Gauff threatened to wallop Anisimova as she had two break points to go 4-0 up. An error from the 18-year-old Gauff and a smash from her opponent kept 20th seed Anisimova alive in that game.

From then on, Anisimova began to work her way back into the contest, winning the next four games to nudge 4-3 ahead in what turned out to be a tight, yet topsy-turvy, first set.

When Anisimova smacked a forehand into the net to surrender the opening set, Gauff shook Centre Court with a roar of "Come on".

Also Read: Lure of Wimbledon grass courts too much for Venus Williams to resist

At that stage, only one point separated the two players with Gauff having bagged 51 of the 101 points contested.
But Anisimova refused to roll over and, despite an early exchange of breaks in the second set, she jumped ahead 3-1.

From then on, she was determined to make her debut on tennis`s most famous stage a day to remember. A backhand winner sealed the win and condemned Gauff to her earliest defeat at Wimbledon. Anisimova will meet Serena Williams`s conqueror Harmony Tan for a place in the quarter-finals.