'Whole of India would be praying': Memes galore as support pours in for Afghanistan against New Zealand 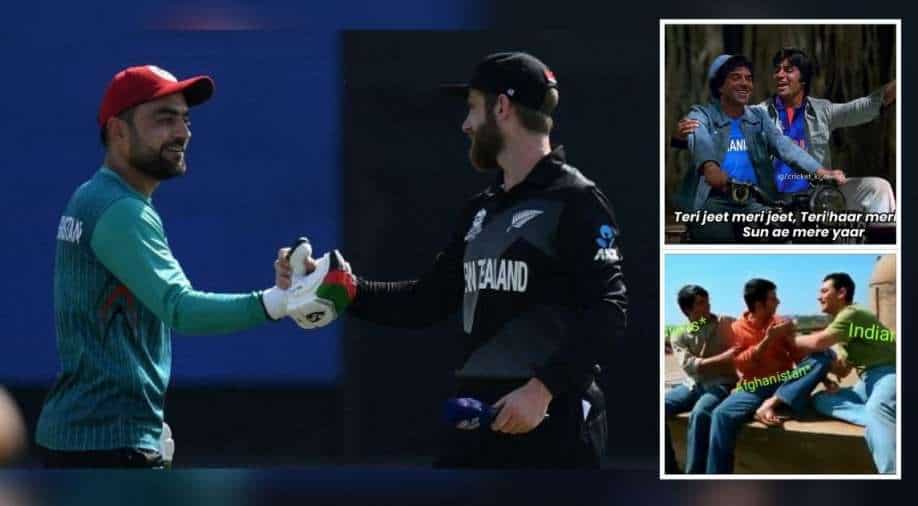 As Afghanistan take on New Zealand in what can be called the 'quarter-final' of the ICC Men's T20 World Cup on Sunday (November 7) at the Sheikh Zayed Stadium in Abu Dhabi, fans have flooded the social media forums with hilarious memes. This particular Super 12 match has gripped cricket fans globally, especially in India as the result of this crucial tie will decide the fate of three teams in Group 2 — Afghanistan, New Zealand and India.

After losing the first two matches against Pakistan and New Zealand, India's big wins against Afghanistan and Scotland left the Virat Kohli & Co. hopeful of making it to the semis. However, to make it happen, New Zealand will have to lose.

New Zealand are just one win away from reaching the semis as if they beat Afghanistan on November 7, they will be guaranteed a spot in the next stage. The complicated scenario has left millions of fans in India to support the Afghanistan team. Some have even expressed it with well-thought memes (some can be understood by Indians only).

Take a look at memes here:

Current situation 😅: India and AUS not only need to win but need AFG and ENG to win too for certain/easier passage. #T20WorldCup pic.twitter.com/6K6x0q7ogs

#AfgvsNZ
Indians motivating Afganistan be like - Come on Afganistan, whole India is behind you aaj ka match jeet gaye to SF me jagah pakki pic.twitter.com/Fzoe4aVXgt

Indian Cricket Fans on their way to support #Afghanistan@Memes_Raj pic.twitter.com/I9LXe53fBl

During the match, Afghanistan captain Mohammed Nabi won the toss and elected to bat against New Zealand. Afghanistan made one change with Mujeeb ur Rahman coming in place of Sharafuddin while New Zealand fielded an unchanged playing XI.