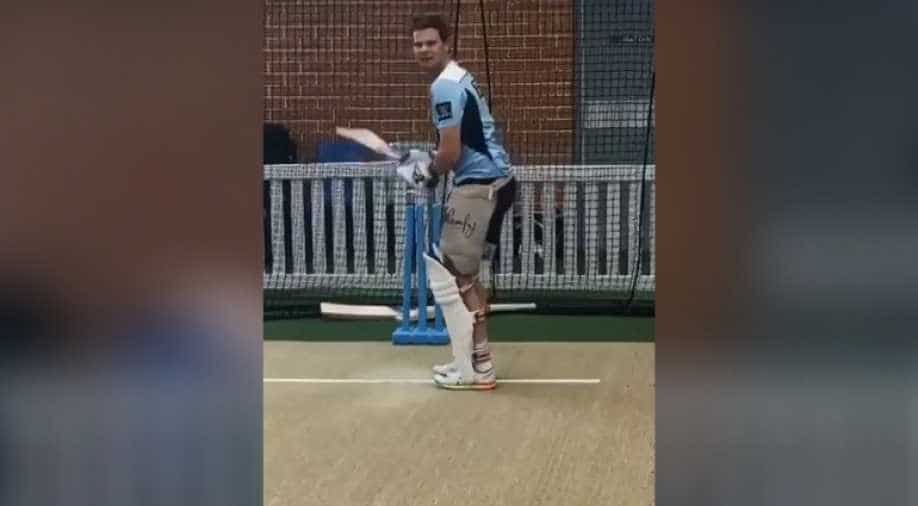 Steve Smith has returned to the nets. Photograph:( Instagram )

Ace Australian batsman Steve Smith has revealed the reason behind his unusual stance, which sees his back-foot get planted in the line of off-stump.

The world’s number one Test batsman, Steve Smith has managed to outfox every world-class bowler by his unorthodox technique, which has left many bemused. The former Aussie skipper has, thus far, amassed as many as 7,227 runs in 73 Tests and 4,162 runs in ODI cricket with an uncanny technique and is hailed as one of the greatest batsmen ever to have graced the cricket field.

Smith has now revealed the reason behind his unusual stance, which sees his back-foot get planted in the line of off-stump. Speaking of his unorthodox batting stance, Smith said that his body posture depends on the bowler he is facing and how the wicket is playing on that particular day. However, it is mainly to limit the way of getting dismissed for Smith.

Talking about his open batting stance, Smith, said in a podcast hosted by Rajasthan Royals: “It depends on who’s bowling, how is the wicket playing, how I gonna score and stuff like that or how people are trying to get me out, probably that determines how open I am or otherwise how closed I am.

“But my general stance where my back foot is going to almost off stump or maybe even outside at stages, I know that anything outside my eyeline isn’t hitting the stumps,” he said while adding, “For me, you shouldn’t get out if the ball is not hitting the stumps, so that is just a trick from me when I first started doing it, just limiting the ways I get out,” he explained.

However, Smith has been trapped LBW and experts have blamed his uncanny batting stance for the reason behind the frequency of him getting out in that fashion.

“Sometimes, I get trapped in front but I’m okay with that at stages, knowing that if it is outside my eyeline, I don’t need to try and play the ball, I can just leave that,” he said.

Smith, who was out of cricket action for 12 months after a ban imposed by Cricket Australia for his role in the Cape Town ball-tampering scandal in 2018, was the highest run-scorer in 2019 when it comes to Test cricket. He went on to score as many as 589 runs in the Ashes 2019 at a whopping average of 147.25 laced with two hundred and a double century.