'What a joke': Twitter baffled after third umpire makes a blunder to hand Devdutt Padikkal lifeline in RCB vs PBKS clash 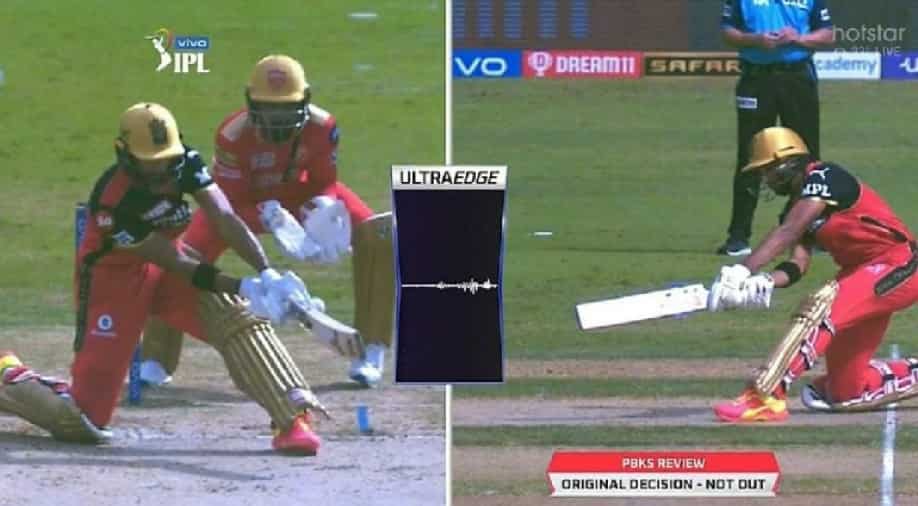 The third umpire made a blunder in PBKS vs RCB clash. Photograph:( Twitter )

Fans and experts on Twitter slammed the third umpire after RCB opener Devdutt Padikkal was handed a lifeline in his side's clash against Punjab Kings in IPL 2021 on Sunday.

The umpiring standards have once again come under the scanner in the ongoing Indian Premier League (IPL) 2021 after the third umpire made a huge blunder in the clash between Royal Challengers Bangalore (RCB) and Punjab Kings (PBKS) on Sunday. RCB opener Devdutt Padikkal was handed a lifeline after a controversial decision by the third umpire at the Sharjah Cricket Stadium in Sharjah on Sunday.

The incident happened in the eighth over of RCB's innings after captain Virat Kohli won the toss and opted to bat first. Padikkal, who was struggling against spinner Ravi Bishnoi, tried to reverse sweep him but ended up edging the ball with his gloves in the process.

KL Rahul appealed straight away after hearing a slight noise but the on-field umpire was not interested which prompted the PBKS captain to ask for a review. The replays showed there was a spike on the ultra edge when the ball passed through the gloves of Padikkal. However, much to everyone's surprise, the third umpire - K Srinivasan adjudged the RCB batsman not out.

The third umpire was heard saying there was no bat involved despite there being a clear spike in the ultra edge which left fans, experts and former cricketers in shock as they slammed him on Twitter. PBKS skipper Rahul was also seen expressing his displeasure to the on-field umpires after the horrendous decision by the third umpire.

"Sack the 3rd umpire immediately #SelectDugout What a joke," former New Zealand all-rounder Scott Styris wrote in a tweet. "How was that Not Out??? #Devdutt #IPL2021," asked Aakash Chopra.

Terrible umpiring, mistakes like that is unforgivable with so much technology and help these days! #RCBvsPBKS #IPL2021

What qualifies as a spike on Ultra Edge? #RCBvsPBKS

How on earth was that not out? Did I miss the cricket rules changing?#RCBvsPBKS #Ridiculous pic.twitter.com/0h5r1dOqNR

Padikkal went on to score 40 off 38 balls and added 68 runs for the first wicket with skipper Virat Kohli (25). Glenn Maxwell notched up his second successive fifty as he slammed a quickfire 57 off 33 balls to help RCB post 164/7 on the board in 20 overs.

While RCB are one win away from securing a spot in the playoffs in IPL 2021, PBKS need to win this encounter to remain alive in the race for top four.