We used to say Pakistan don't have Kohli, Rohit. Now India will say we don't have Babar, Rizwan: Rashid Latif 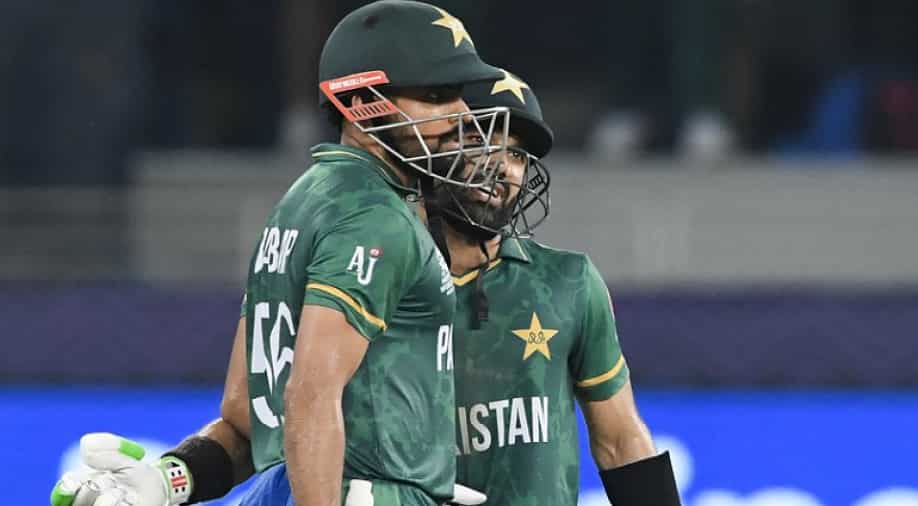 Babar Azam and Mohammad Rizwan were the top two run-getters in T20Is in 2021. Photograph:( AFP )

Former Pakistan skipper Rashid Latif feels the tables have turned and that Indian fans will now say why don't they have players like Babar Azam and Mohammad Rizwan in their team.

Taking a dig at Indian cricket team fans, former Pakistan captain Rashid Latif has said Indians will now say they don't have players like Babar Azam and Mohammad Rizwan in their team. Latif lauded the Pakistani opening duo for their batting heroics in T20Is this year and hailed them for their remarkable consistency.

Babar and Rizwan displayed sensational form throughout the year and dominated the proceedings in T20Is. The duo produced several memorable match-winning partnerships for Pakistan and broke a number of records with their batting exploits in the shortest format of the game.

While Rizwan is the top run-getter in T20Is in 2021 with 1326 runs to his name, Babar is at the second spot having amassed 939 runs in T20Is this year. The duo was also in terrific form in the T20 World Cup 2021 where they helped the Men in Green reach the semi-finals.

Hailing Babar and Rizwan for their brilliant consistency, Latif took a dig at Indian fans during a show on Pakistani news channel PTV Sports and said - "About a year ago, we used to say that Pakistan doesn’t have players like Virat Kohli, Rohit Sharma or KL Rahul, especially in T20 cricket. But I think, after some time, Indians will also say that we don’t have players like Rizwan and Babar.”

Babar and Rizwan are the only players to have crossed the 900-run mark in T20Is this year and have been sensational as an opening duo for Pakistan. Rizwan had recently become the first batsman in the world to notch up 2000 runs in a calendar year in T20 cricket. 1326 of those came in T20 internationals for Pakistan, including twelve half-centuries and a hundred.

Despite being consistent performers for their team in T20Is, Babar and Rizwan have often been criticised for their moderate strike rate. However, Latif believes the duo has made up for their strike rate by pacing their innings perfectly.

"Earlier, we also had our reservations about their scoring rate, but they made up for it by pacing their innings perfectly," said the former Pakistan captain.