WATCH: Yuzi Chahal leaves Irfan, Chopra in splits on being asked about Bishnoi's dropped catch off his bowling 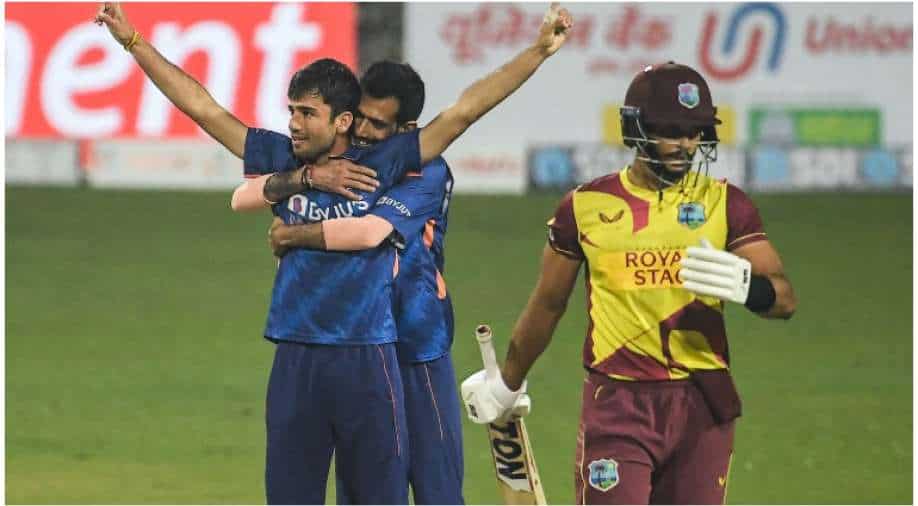 WATCH: Yuzi Chahal left Irfan Pathan and Aakash Chopra in splits, when asked to react to Ravi Bishnoi's dropped catch off his bowling in the 2nd T20I versus West Indies.

The match lived upto expectations as the Windies' batters Pooran and Powell kept the run-chase alive till the end overs before their respective half-centuries went in vain. During the run-chase, India dropped quite a few chances. Ravi Bishnoi and Bhuvneshwar Kumar dropped a catch each whereas some extra runs were also given to the visitors due to the hosts' sloppiness on the field.

Bishnoi gave Pooran a reprieve off senior leg spinner Yuzvendra Chahal's bowling. For the unversed, the former had also touched the boundary rope while completing a catch off Chahal's delivery in the series opener. Thus, broadcasters Irfan Pathan and Aakash Chopra interacted with Chahal post the second T20I, where the former reminded Chahal of Bishnoi's fielding.

When Irfan asked 'where is Bishnoi taking you for dinner', Yuzi Chahal left the former all-rounder, Chopra and other presenters in splits by saying, "firstly, I'll take him to the corner.' Here's the video:

At the post-match presentation, Rohit also opined on India's fielding and told the broadcasters, "We were a bit sloppy on the field. A little disappointed with that. The game would have been different had we taken those catches."