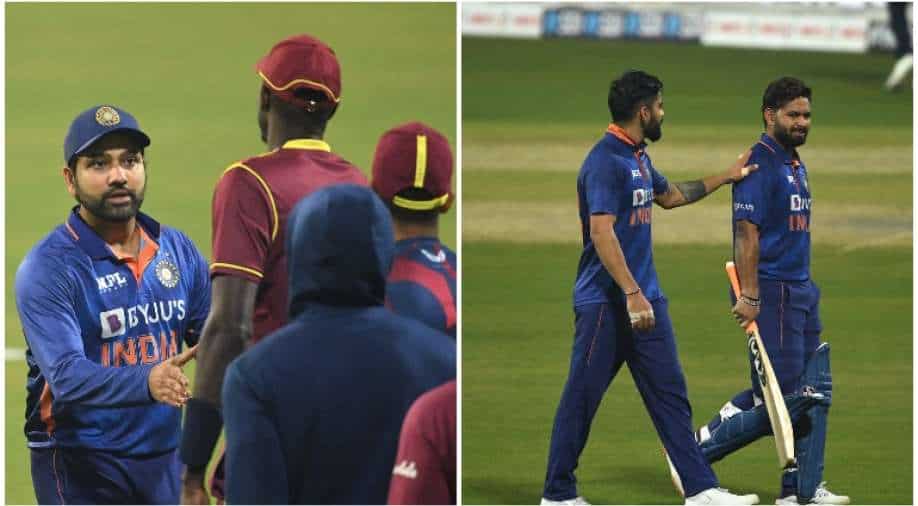 India vs WI, 2nd T20I: Rohit Sharma gave a hilarious reaction after hearing that Rishabh Pant was adjudged the Player-of-the-Match in the high-voltage encounter. Here's the video:

Rohit Sharma-led Team India beat West Indies in the second and penultimate T20I by 8 runs to clinch the series with a game to go. On Friday evening (February 18), the Men in Blue locked horns with Kieron Pollard-led West Indies at the Eden Gardens, Kolkata and put on another good show to claim the three-match series.

Being asked to bat first, Rohit & Co. rode on half-centuries from Virat Kohli and Rishabh Pant to post 186-5. In reply, West Indies were kept in the run-chase courtesy a century-stand from half-centurions Nicholas Pooran and Rovman Powell before some tight bowling in the end overs turned the tide in India's favour.

At the post-match presentation, captain Rohit was a relaxed man after an intense encounter at his happy hunting ground. Nonetheless, he gave a hilarious reaction after knowing that Pant was adjudged the Player-of-the-Match in the high-voltage encounter.

At the post-match presentation, Pant pointed out, "As long as the team wants me to bat anywhere, I am fine. I think inside the circle, everyone was looking for that catch (Powell) to be taken and we thought it was Bhuvi's catch but it happens and it's part and parcel of the game. I don't mind playing the situation and not only at the death. The more you practice, the better you get. The only thing we (during partnership with Venkatesh Iyer) were talking was we will play according to every ball. It is never easy to play every game but this is what I have always wanted to do. I always enjoy what I do. He (Powell) was hitting bullets. At the back of my mind I was happy as well as Powell will be playing for Delhi Capitals (smiles)."

Pant and Kohli have been rested for the third and final match versus West Indies and will also skip the Sri Lanka T20Is. BCCI named the squad for the SL series on Saturday (February 19).