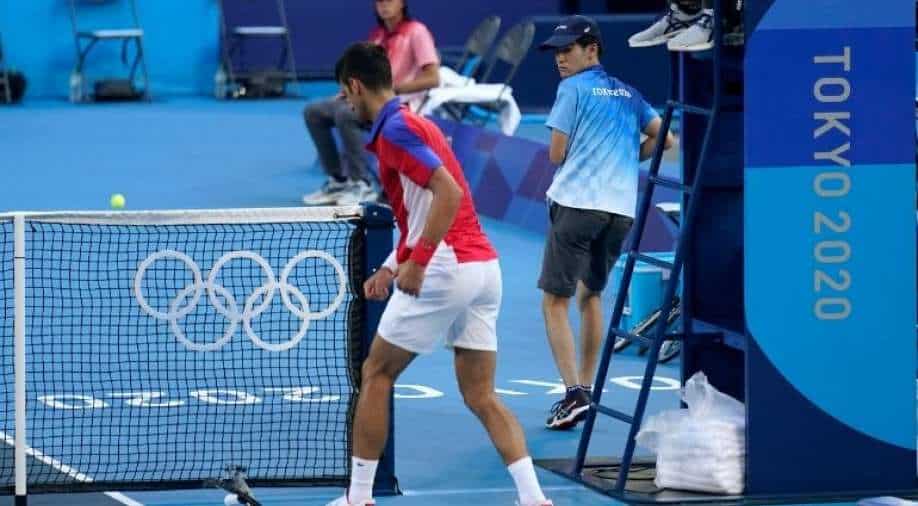 Novak Djokovic, of Serbia, breaks his racket during the bronze medal match of the tennis competition against Pablo Carreno Busta, of Spain, at the 2020 Summer Olympics, Saturday, July 31, 2021, in Tokyo, Japan. Photograph:(AP)
Follow Us

Novak Djokovic could not conceal his frustration as he fell to defeat by Pablo Carreno Busta in the men’s singles bronze-medal match at Tokyo 2020.

Despite all the excitement and expectation around him perhaps attempting a Golden Slam this season, world number one Novak Djokovic was left without a medal following the Tokyo 2020 Olympic Games.

After losing to Alexander Zverev in the semi-finals, the Serb was beaten by Spain's Carreno Busta 6-4, 7-6, 6-3 in the bronze medal match.

During the game, Djokovic was spotted banging his racket against the net and throwing it into the stands.

The footage of the event has gone viral on the internet, with many people expressing their displeasure with the renowned Serb's on-court behaviour.

The 34-year-sole old's Olympic medal came in the men's singles event in Beijing in 2008, but his incredible success this season – which included victories at the first three Grand Slams of the year – put him on track for gold in Tokyo and maybe another US Open title.

If Djokovic had won each of those awards in a row, he would have completed an incredible Golden Slam, but that goal is now firmly out of reach.

For Djokovic and his followers who were expecting a gold medal, this is a sad setback.