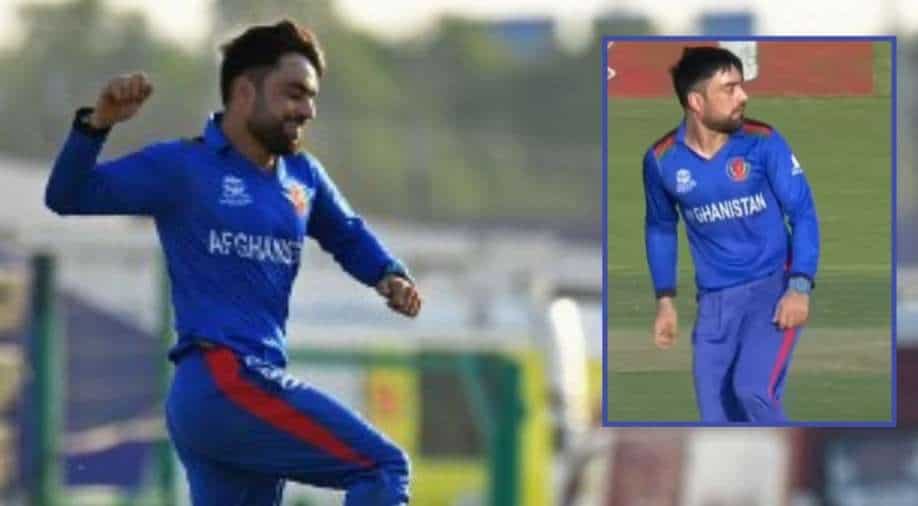 During the match, the leg-spinner Rashid Khan became the quickest bowler to pick 400 T20 wickets. But don't miss his football skills ..scroll to watch the video

Afghanistan exited the ICC Men's T20 World Cup 2021 after losing their final match of the Super 12 stage against a clinical New Zealand team by eight wickets on Sunday (November 7) at the Sheikh Zayed Stadium in Abu Dhabi.

The result of the contest decided the fate of three teams in Group 2 as with the help of victory, Kane Williamson's side cruised through to the semi-final of the tournament. On the other hand, Afghanistan and Virat Kohli-led Team India were ousted.

Millions of fans were glued to their televisions as the match was such a blockbuster. Both the teams were eager for a victory but New Zealand emerged as the better side.

From disciplined bowling to outstanding fielding to balanced batting, the match had plenty of aww-worthy moments, and Rashid Khan's football skill was among them.

During the match, the leg-spinner Rashid Khan became the quickest bowler to pick 400 T20 wickets. With this, Rashid joined an elite list of cricketers, who have scalped 400 wickets in T20 cricket. He is the 4th bowler after Dwayne Bravo (553), Sunil Narine (425), and Imran Tahir (420) to achieve the milestone.

The 23-year-old spinner achieved the feat in his 289th T20 match and New Zealand opening batsman Martin Guptill became his 400th victim in the shortest format of the game.