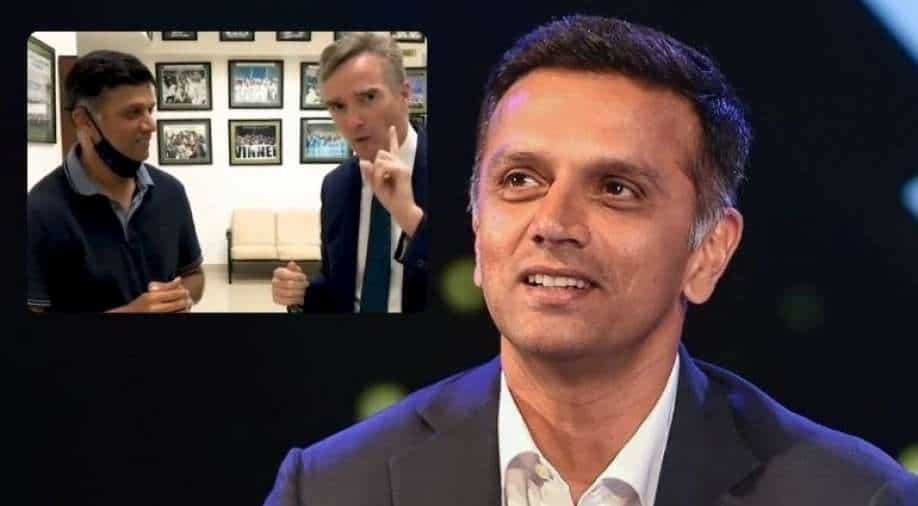 British High Commissioner to India, Alex Ellis, was seen learning some cricket-related terms and expressions in Kannada from none other than Rahul Dravid.

Former cricketer Rahul Dravid, who is known for his outstanding cricketing skills, was recently spotted "teaching" British High Commissioner to India, Alex Ellis — but not cricket. In a hilarious video, Ellis was seen learning some cricket-related terms and expressions in Kannada from none other than the Indian team's coach.

The caption of the video read, "Cricket expressions in Indian languages part 2. Today, we're down south in Bengaluru. What better teacher than ‘The Coach’ #RahulDravid."

The cricket fever is high in India, considering ongoing India's tour of England for the five-match Test series and also the upcoming high-octane events like the remainder of the Indian Premier League (IPL) and T20 World Cup.

ALSO READ | 'We are so proud': Virat Kohli's message for Indian winners and participants at Tokyo Olympics

Dravid recently returned after coaching the Indian team during the Sri Lanka tour, where the team won the One-Day International series 2-1 but lost the T20I series after several Indian players were dropped due to testing positive for COVID-19 in the last two matches.

Now, it looks like he has taken his role of cricket coach to the next step — A Kannada teacher.

Alex Ellis tweeted the video in which he said, "England and India are playing each other and I am on the hunt for the best Indian cricket expressions. We have come to Bangalore and we have come to one of the greatest players to have played the game and he's going to teach me and you one phrase in the language of the state - Kannada."

Today, we’re down south in Bengaluru.

What better teacher than ‘The Coach’ #RahulDravid, who taught taught me this in #Kannada ಕನ್ನಡ 👇 pic.twitter.com/tDCtHOcIwa

Alex Ellis' love of India is not new, recently he had posted another video related to cricket with a caption, "As the First #ENGvsIND Test unfolds, my attempt, with the help of the @UKinIndia cricket team, to introduce #England fans to a bit of cricket Hindi, with a dash of Tamil."

Not just cricket, he also posted to show his interest in delicacies of India, for example, Dosa. See post:

92% of Twitter is correct! It tastes better with the hand. ✋