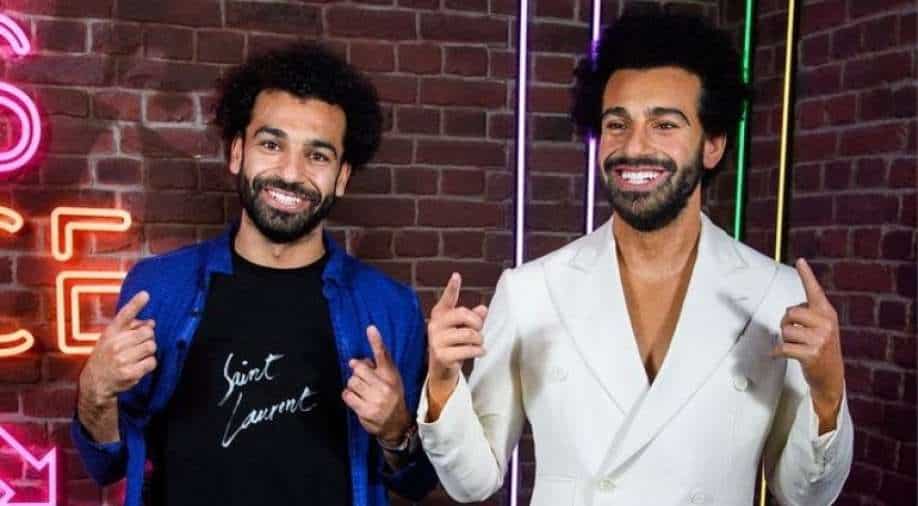 The Salah wax figure will be displayed in the 'Awards Party' zone alongside figures Brad Pitt and Priyanka Chopra Jonas, etc.

Liverpool star Mohamed Salah has been immortalised at London's Madame Tussauds wax museum as he went face to face with his wax double over the weekend in a private viewing before the attraction opens to the public on Friday (October 22).

The wax figure has one finger on each hand pointing to the sky, which is Salah's signature goal-scoring celebration. The Egyptian forward was all smiles when he was inspecting the wax figure as he reacted: "That looks exactly like me, it is like I am looking into the mirror. Does he have abs or no?"

Salah's wax figure is dressed in a cream suit that he footballer wore when he was on the cover of GQ Middle East magazine. For the completion of the figure, Salah sat with Madame Tussauds' team of artists and had hundreds of measurements taken to ensure the near-perfect replica.

Salah later said, "It's a blessing to be recognised and immortalised in this way. It's been an amazing experience working with the artists at Madame Tussauds London to create my first ever wax figure."

Not just that, Salah even peeked inside the wax figure's shirt  to check wheater it has abs or not.

The Salah wax figure will be displayed in the 'Awards Party' zone alongside figures of David and Victoria Beckham, the Duke and Duchess of Cambridge, Dwayne Johnson, Helen Mirren, Brad Pitt and Priyanka Chopra Jonas.