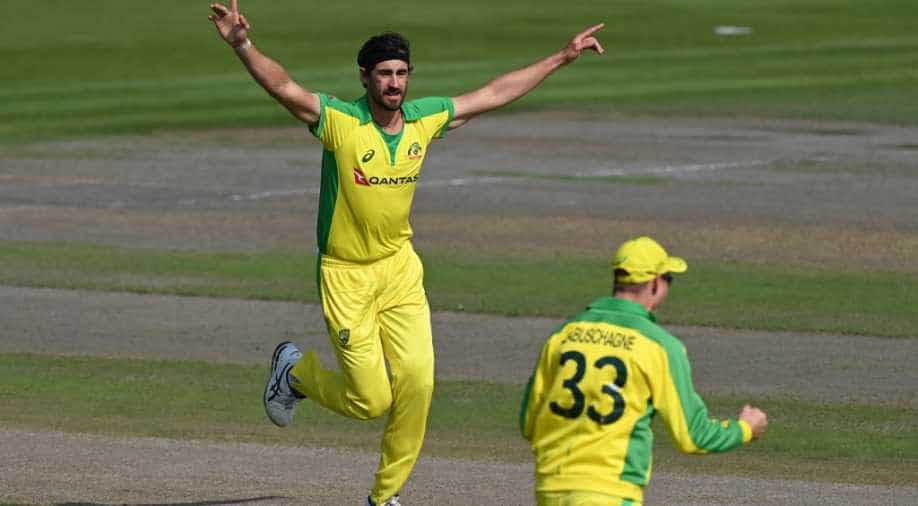 Mitchell Starc on Wednesday breathed fire as he took two wickets from the very first two deliveries of the first over to dismiss English opener Jason Roy and Joe Root in the third ODI between England and Australia at the Emirates Old Trafford in Manchester.

Mitchell Starc on Wednesday breathed fire as he took two wickets from the very first two deliveries of the first over to dismiss English opener Jason Roy and Joe Root in the third ODI between England and Australia at the Emirates Old Trafford in Manchester.

While the first delivery by Starc was way outside the off-stump, Roy went hard for the drive only to send it straight to the hands of Glenn Maxwell standing at point. Root may have thought to steady the rocky start but England’s Test captain was caught plumb by Starc in the second delivery as the southpaw bagged back-to-back wickets to leave England 0/2. However, captain Eoin Morgan denied him the hat-trick.

Mitchell Starc with 2 wickets in the first two balls of the day 🙄🙄
"Come on England" 🏴󠁧󠁢󠁥󠁮󠁧󠁿🏏#ENGvAUS pic.twitter.com/myHtbYdiHe

England have hosted the West Indies, Pakistan, Ireland and England, and are yet to lose a series since the restart. However, with Australia getting a solid start, the visitors would be upbeat about their chances of clinching the series.

Here’s what the captains said at toss:

Aaron Finch - We would have batted first as well. With the lights on, it tends to skid on. Looks a pretty dry wicket, need to bowl well in the first 10 hours. We are playing with the same team. He (Smith) had a long net but didn't feel hundred percent after that blow, so he's going to miss again. We had our chances, but we let them get away. We knew it was going to be a difficult chase, but we need to keep learning and hopefully we win today. We stuck with our skills for most part of the first innings, but we failed to execute in the final overs, they have a strong batting line up.

Eoin Morgan - We are gonna bat first. Think it's a good wicket with a short boundary on one side, hopefully we can capitalize on it. We have made one change - Wood comes in for Sam Curran. He's extremely talented and a versatile all-rounder. We are going in with pace today. We need to grow and learn going forward. Playing against a really strong Australian side. We gained a lot of confidence with the bowling group winning us the last game. Thank all the teams who came here (over the last three months) - West Indies, Pakistan, Ireland and Australia. The ECB have done an exceptional job in getting these games smoothly in these circumstances.