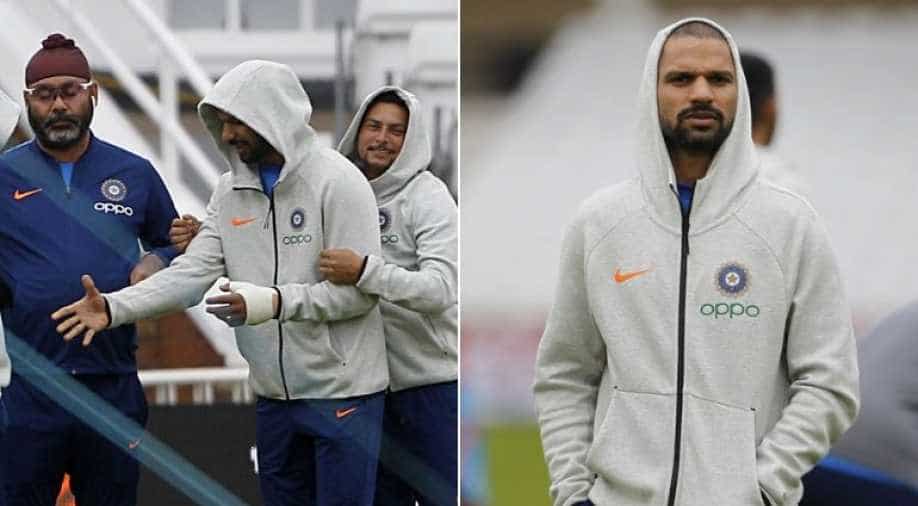 Indian opener Shikhar Dhawan will miss the next three to four games with a hand injury, assistant coach Sanjay Bangar confirmed ahead of team's upcoming match against New Zealand.

Dhawan, however, was spotted at the nets during India's practice session. The left-hand batsman was seen strolling around the ground, talking to India's bowling coach Bharat Arun and leg-spinner Kuldeep Yadav.

Dhawan sustained the injury during his match-winning hundred against Australia on Sunday when Nathan Coulter-Nile's rising delivery hit on his hand.

Bangar also confirmed that back-up opener KL Rahul, who was picked to play at number four, will partner Rohit Sharma at the top of the order starting with Thursday's match against New Zealand.

"In 10-12 days we'll be taking a call on the status of Shikhar," Bangar told reporters after the team's light practice at Trent Bridge.

"If and when a replacement is required, it's always good to have the replacement player already in and practising regularly as a standby."

#WATCH Shikhar Dhawan at India's practice session at Trent Bridge, Nottingham ahead of their #ICCCricketWorldCup2019 match against New Zealand, tomorrow. He had suffered a fracture on his thumb in India's match against Australia on 9 June & has been ruled out for at least a week. pic.twitter.com/4PjV3dvH6j

"...Dhawan is presently under the observation of the BCCI medical team. The team management has decided that Dhawan will continue to be in England and his progress will be monitored," the Indian team said in a statement.

"Dhawan sustained an injury on the back of his left hand in the region between the index finger and thumb...," the statement added.