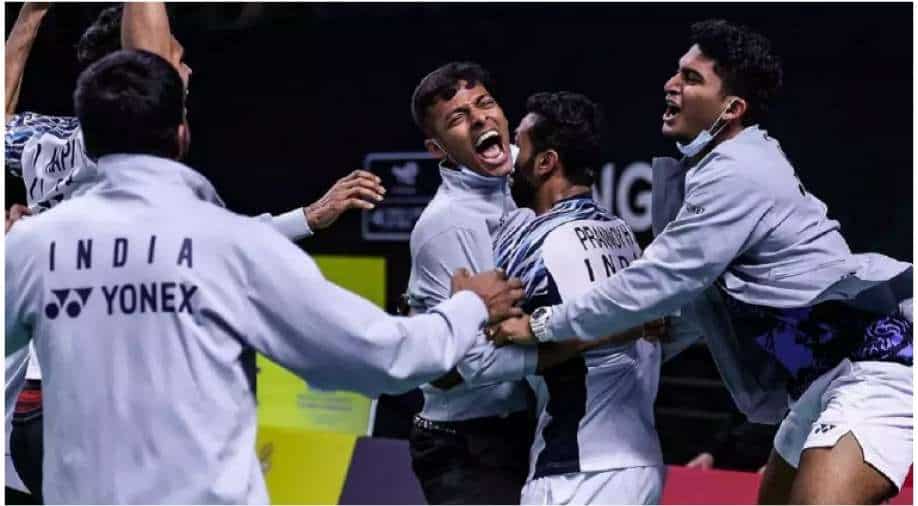 Indian players stormed to the court in excitement to celebrate after beating Malaysia in the Thomas Cup quarter-finals on Thursday (May 12). Here's the video:

Team India consist of former World Number 1 Srikanth, HS Prannoy, Chirag Shetty-Satwiksairaj Rankireddy, etc. as they stood tall in crunch moments to beat Malaysia 3-2 in a riveting battle on court. It went down to the last clash, between Prannoy and Leong Jun Hao where the Indian star negated early hiccups to emerge on top  21-13, 21-8. As a result, his Indian players joined him in the middle as soon as he assured the team of a win in the decider. The young Indian stars mobbed Prannoy and celebrated wildly as India created history in the Thomas Cup:

Talking about the quarter-finals, Lakshya Sen started the proceedings as he lost his single's match to current world champion, Lee Zii Jia 21-23, 9-21. From thereon, India stormed their way back into the contest with two wins on the trot courtesy of doubles pair Chirag-Satwiksairaj and Srikanth, who beat the world number 46 NG Tze Yong (21-11, 21-17).

Nonetheless, more twists and turns were in the offing as the young pairing of Krishna Prasad Garaga and Vishnuvardhan Goud Panjala lost to the Malaysian pair of Aaron Chia and Teo Ee Yi, 21-19, 21-17 and the onus firmly was on Prannoy.

The 29-year-old shuttler didn't disappoint as India now move to the semi-finals. With this, India have also assured themselves of their first medal since the change of format. Meanwhile, PV Sindhu-led Indian team lost their quarter-finals clash to Thailand in the Uber Cup.