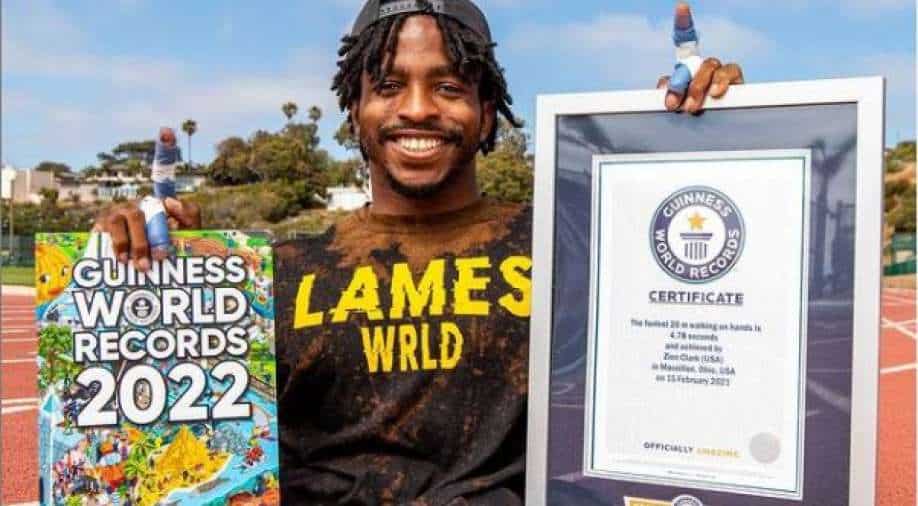 Zion Clark is a 23-year-old motivational speaker and athlete from Ohio.He set a Guinness World Record for the fastest 20-meter walk using only his hands.Clark was born without legs and has caudal regressive syndrome, which is defined by poor lower-body development.

A differently-abled American athlete has broken world records by walking the fastest 20 metres using only his hands.

As a motivational speaker, author, and entrepreneur, Clark had already inspired many people before this.

With this incredible achievement — a monument to his willpower and bravery — he has now been inducted into the hall of fame.

He was born without legs and hails from Ohio. Clark had caudal regression syndrome, which is characterised by aberrant lower-body development in which the spine's bones are frequently missing.

His infirmity, on the other hand, has never stopped him from pursuing his passion. He used to be a wrestler and was always interested in sports.

He attempted to beat the record for the quickest man who could sprint on his hand for the first time in February 2021. He did so at the gym of his high school in Massillon, Ohio.

'He exploded in a burst of speed, smashing the record in a time of 4.78 seconds,' according to the website of the record-keeping organisation.

“What a great feeling to be a Guinness World Record Holder! Especially considering every school K-12 keeps a copy of this book,” Clark remarked while posting a video on Instagram about the organisation's special record book.