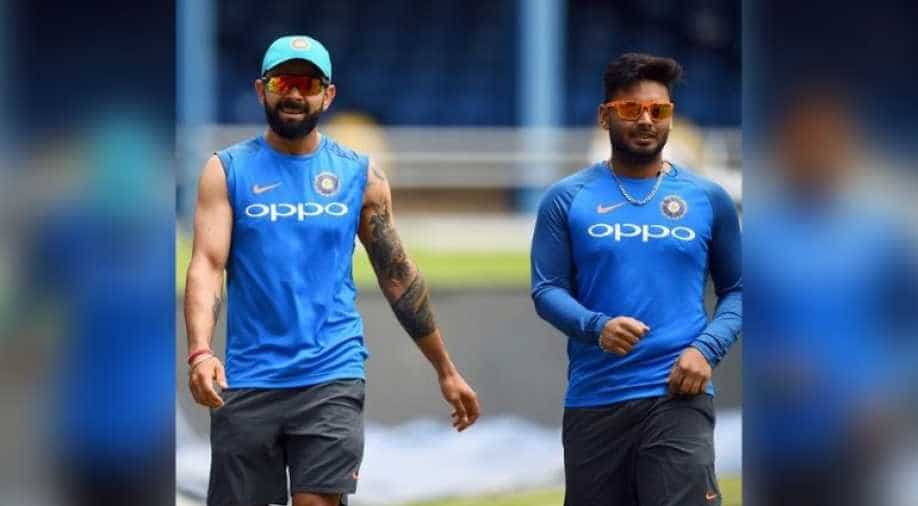 Dhoni is sitting out India's tour, which begins with the first Twenty20 against West Indies in Florida later on Saturday, to discharge his responsibilities as an honorary colonel in the army

Dhoni is sitting out India's tour, which begins with the first Twenty20 against West Indies in Florida later on Saturday, to discharge his responsibilities as an honorary colonel in the army.

The 38-year-old is part of the Territorial Army, a reservist force that draws on civilians who can do short stints to assist the military, and started patrol duties in conflict-torn Jammu and Kashmir from Wednesday.

Pant, 21, has been long earmarked as the successor to Dhoni, who is a veteran of 350 one-dayers and quit playing Tests at the end of 2014.

"It's a great opportunity for someone like Rishabh Pant to really play a lot of international cricket, show his credentials, really unleash his potential at this stage," Kohli told reporters in Fort Lauderdale.

"We know how much ability he has and we all want him to become a consistent performer for the Indian cricket team.

"MS's experience is always going to be a very, very crucial factor but having said that some of these younger guys have a great opportunity ahead of them and they should just look forward to it."

Dhoni, 38, has been the subject of intense speculation on his retirement from international cricket since India's semi-final exit from the World Cup.

Questions have been raised by former cricketers, pundits and local media if it was the right time for him to step away and help India groom his successor.

Dhoni has not provided even a hint of his plans but he enjoys unwavering support from Kohli, who has publicly backed him on numerous occasions.

With regular all-rounder Hardik Pandya also rested for the trip to the Caribbean, where India will play three T20s, three ODIs and two Tests, the touring side will miss their regular 'finishers' in the limited-overs formats.

Kohli said it was a chance for the fringe players to make their case ahead of next year's World T20 in Australia.

"It's a great opportunity for the guys stepping in, to deliver what we need from them as a team and really cement their spots," Kohli said.

"Not having the two finishers, Hardik and MS, around is different to what we are used to. But it also presents an opportunity for the guys coming in to show what they have.

"Looking forward to the World T20 next year I think it's a great position to be in for all these guys coming in."

IPL 2021: Glenn Maxwell eager to learn from 'pinnacle of the game' Virat Kohli at RCB

'There was spin but...': Sunil Gavaskar opines on the Ahmedabad pitch in IND vs ENG series