US women's team fights back against governing body's pay claims 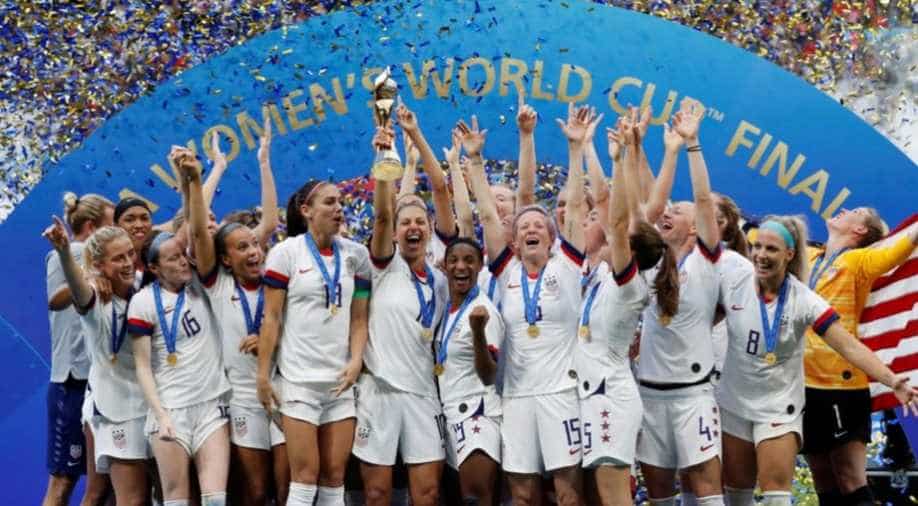 US and team mates celebrate winning the women's world cup with the trophy. Photograph:( AFP )

All 28 member of the US women's national soccer team sued the US Soccer Federation for gender discrimination in March in a lawsuit that included complaints about wages and working conditions.

US women's national football team players pushed back in a court filing on Monday against claims by the US Soccer Federation that some members earn more than their male counterparts, as they argued for class-action status in the latest chapter of their closely-watched legal fight.

All 28 member of the US women's national football team sued the US Soccer Federation for gender discrimination in March in a lawsuit that included complaints about wages and working conditions.

Mediation between the two parties broke down in August, weeks after US Soccer's President Carlos Cordeiro said in an open letter that the organisation has paid more to the women's team than the men's in recent years.

A week ago, the organisation said it opposed the women's players bid for class-action status in their suit.

Those four players - Megan Rapinoe, Carli Lloyd, Alex Morgan and Becky Sauerbrunn - would have earned far more under the men's team's pay rate policy, the plaintiffs argued in the filing.

A spokesman for US Soccer said members of the men's national team have the chance to earn larger bonuses, but they do not receive guaranteed money in their "pay-for-play contract structure."

"Our men and women's national teams have different pay structures, not because of gender, but because each team chose to negotiate a different compensation package with US Soccer," the spokesman said.

The US women's team successfully defended its World Cup title in July in France, defeating the Netherlands in the final. The team has four women's World Cup titles, more than any other nation.

Players from the US men's squad threw their support behind their female counterparts in July and accused US Soccer of not paying a fair share of generated revenue to national team players.

The dispute has attracted international attention, with numerous celebrities, athletes and politicians backing the women's players amid renewed conversation over pay equity in the United States.