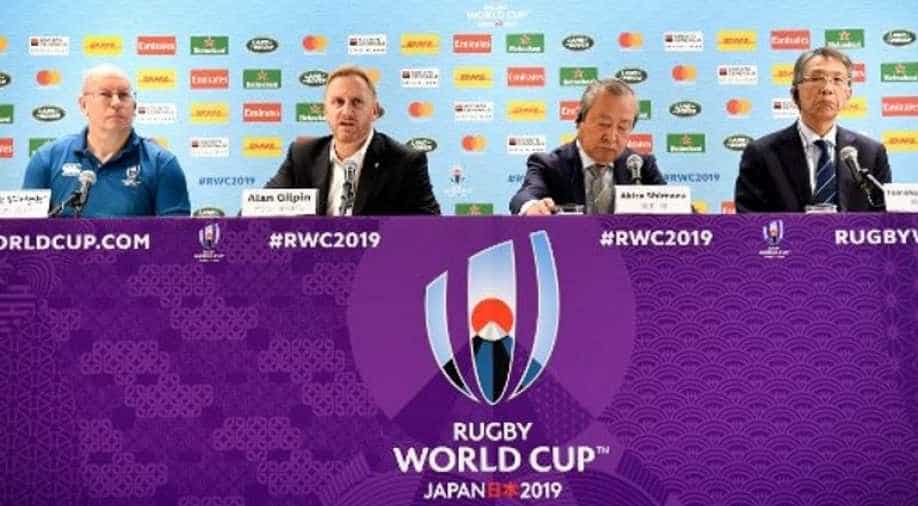 Both games were in the projected path of the large and powerful typhoon, which currently has a "violent" rating -- the highest category by Japan's weather bureau -- and is due to hit the Tokyo area on Saturday.

Sunday's four games, including the Pool A shoot-out between hosts Japan and Scotland in Yokohama, near Tokyo, remain under review, said tournament director Alan Gilpin.

"While it's regrettable, we've made, we believe, the right decision with everyone's safety as the priority," he added.

Tens of thousands of fans, many of the visitors from abroad, will be affected by the cancellations, the first in the tournament's 32-year history. Their tickets will be fully refunded, Gilpin said.

Japan, whose capital Tokyo hosts the Olympics next year, is battered by around 20 typhoons per year and is one of the world's most seismically active countries.

But Gilpin stressed he had "no regrets at all" about bringing the World Cup to Japan, the first Asian country to host the tournament.

"I think what you've all seen over the last three weeks absolutely in every respect vindicates the right decisions to be hosting a World Cup here in Japan," he said.

"We always knew there were going to be risks. It's rare for a typhoon of this magnitude to cause this impact this late in the typhoon season."

He added that World Rugby had looked "pretty exhaustively" at other options for the games, including switching venues, but "we couldn't guarantee consistent contingency plans across all those games safely for all the teams and fans involved".

Seven games were slated for the final weekend of the pool stage, when matches are tightly packed and cannot be rescheduled. Cancelled games are recorded as 0-0 draws, with both teams awarded two points.

England and France have already qualified from Pool C, with Eddie Jones's men top of the group, but Pool A hangs in the balance ahead of Japan's final game against Scotland in Yokohama on Sunday.

If that game were abandoned, Scotland would be eliminated and Japan would qualify for their first quarter-final as shock group winners, with Ireland runners-up.

Australia's game against Georgia on Friday will go ahead, as will Saturday's match between Ireland and Samoa, which is in Fukuoka in Japan's southwest, out of the predicted path of the storm.

Hagibis, packing maximum gusts of up to 270 kilometres per hour, is currently projected to batter the Tokyo and Yokohama area on Saturday.

The storm "is predicted to be the biggest typhoon of the 2019 season and is highly likely to cause considerable disruption... including likely public transport shutdown and disruption", said Gilpin.

Japan's Meteorological Agency said Hagibis was currently "a large and violent typhoon" and while it will weaken before hitting the mainland, it will "remain very strong" and have a "significant impact over large areas".

Hagibis is currently forecast to clip the southeastern corner of Japan near Tokyo and Yokohama but given its size, the impact will be felt across wide swathes of the country.

Formula One organisers also said they were "closely monitoring" the potential impact of Hagibis ahead of this weekend's Japanese Grand Prix at Suzuka, southwest of Tokyo.

In 2014, Marussia driver Jules Bianchi crashed in bad weather conditions caused by a typhoon, and remained in a coma until his death the following July.

Many people in Chiba, east of Tokyo, are still recovering from Typhoon Faxai, which struck Japan in early September and caused widespread disruption, leaving two people dead and cutting power to half-a-million homes.

Hagibis is taking a similar trajectory to Faxai but is nearly three times bigger in terms of area.

Organisers received immediate criticism for the cancellations, with former World Cup winner Francois Pienaar telling Sky Sports: "Everybody has worked so hard. Why, if you work that hard and prepare yourself, let weather influence the outcome of the match? It shouldn't."

Simon Learey, a British fan here, said he had flown out for the England-France game after getting the tickets as a birthday present.