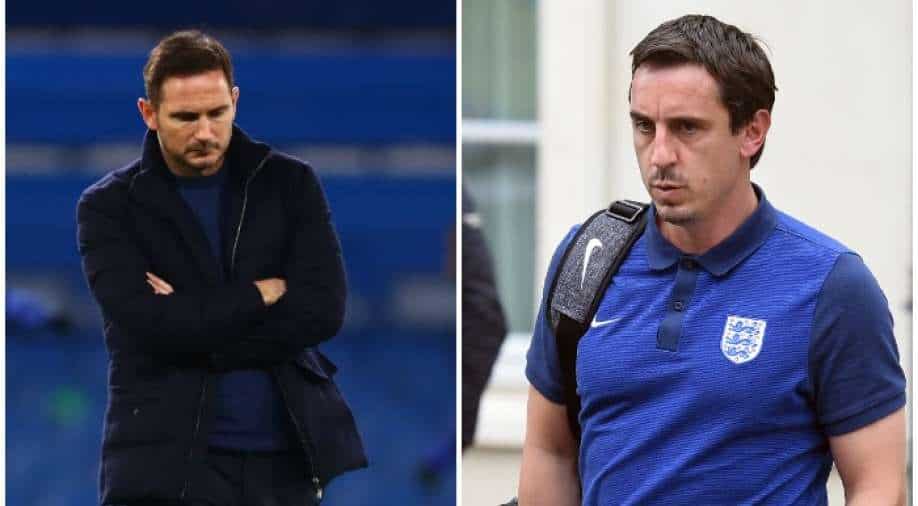 Tuchel will be exposed to the exact same rules: Gary Neville on Frank Lampard's sacking as Chelsea manager Photograph:( AFP )

Former England international Gary Neville has said that "expectations" cost Frank Lampard his job after Chelsea spent lavishly on new players in the summer transfer window. Chelsea on Monday sacked Lampard as the manager of the club after a string of poor results in the Premier League.

Former England international Gary Neville has said that "expectations" cost Frank Lampard his job after Chelsea spent lavishly on new players in the summer transfer window. Chelsea on Monday sacked Lampard as the manager of the club after a string of poor results in the Premier League.

Lampard was sacked by Chelsea, where he became a football legend as a player, 18 months into his role as manager. While Lampard did exceedingly well by taking Chelsea into a top-four finish last season, heavy spending in the summer window blended with recent series of dismal performances resulted in his sacking.

The Blues have won just one in their five Premier League matches and are currently lying ninth in the table.

“Frank has had a short amount of time with a new set of players. He was given a period under a transfer embargo, it shielded him, he did a great job in that period but the minute they spent the money they did, it was always going to bring more expectation and we know what happens at Chelsea when expectation comes,” Neville told Sky Sports News.

“When you have one of the biggest budgets in the league and biggest spend, expectation comes with it and at Chelsea, their approach to managers has been consistent and Frank knew that when he got the job.

“Frank won't want people to feel sorry for him, he'll have an understanding that he went into a club that has always been like this with managers. The results and inconsistent form has cost him. As a club legend we maybe all thought he'd get a bit more time.”

However, Neville said that it wasn't a mistake on Lampard's part to accept the job offer by Chelsea as the former English defender wished he would go on to build a great managerial career in future.

Thomas Tuchel, who was recently sacked by Paris Saint-Germain, is favourite to take over the charge at Stamford Bridge. Neville warned that Tuchel will be exposed to the same expectations by the Chelsea board similar to what happened to Lampard.

ALSO READ: From Messi to Ramos: Football stars who run out of contracts in 2021

“I don't believe it was too early, he had no choice,” Neville added. “It's OK everyone saying pick and choose, maybe he wasn't right, there was no way you turn it down if you're Frank Lampard. He's a better manager today than he was 17 months ago, I hope he's able to go and build a brilliant managerial career.

“I sit here with no feeling of sorry for Frank, or that he's done anything other than a good job. It's Chelsea... Frank has been exposed to Chelsea releasing managers every 12 to 18 months if things don't go as they want.

“I don't have any great deal of worry for Frank's career. Tuchel will be exposed to the exact same rules as Frank and we'll be saying the same about him in 18 months, two years.”