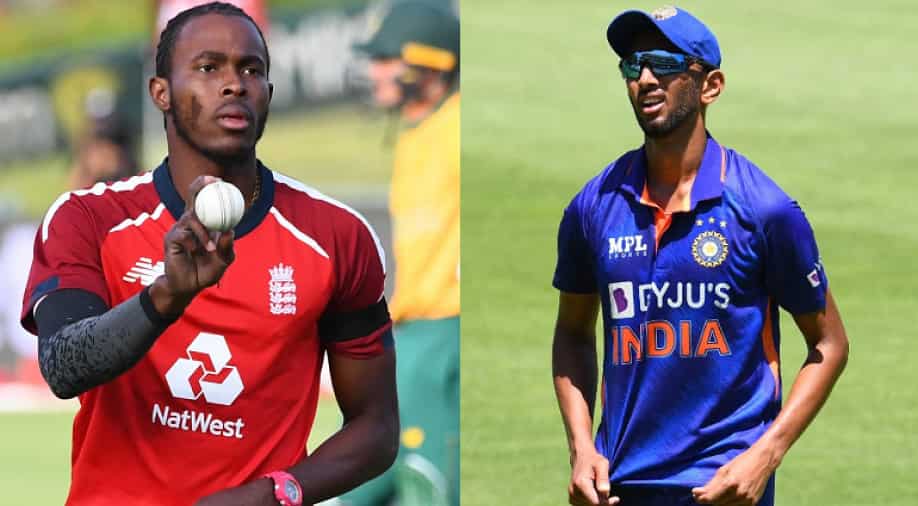 Jofra Archer responded to a troll who abused him over comparisons with Prasidh Krishna. Photograph:( AFP )

England pacer Jofra Archer responded to a troll, who called him 'traitor, unfit and a fraud' in an abusive tweet after Indian fast bowler Prasidh Krishna was compared with the English star.

Indian fast bowler Prasidh Krishna bowled an exceptional spell in the second ODI of the ongoing three-match series against West Indies on Wednesday. Krishna was the pick of the bowlers for India as he bagged a four-wicket haul to help the hosts defend the total of 237 runs and clinch a comfortable win by 44 runs.

It was an excellent display of fast bowling from the young pacer, who maintained great line and length while bowling at a good pace to wreak havoc on the West Indies batting line-up. Krishna finished with stunning figures of 4/12 in his 9 overs as the visitors were bundled out for 193 runs in the 238-run chase.

His brilliant spell in the second ODI earned Krishna comparisons with England pacer Jofra Archer, who is counted among the best fast bowlers in the world at present. While many fans seemed to agree with the comparisons, a troll posted an abusive tweet targeting Archer.

“Please don't compare hard working, honest Prasidh Krishna with that fraud,unfit, traitor, race card player Jofra archer,” the Twitter user wrote while reacting to comparisons between Krishna and Archer. Responding to the troll, Archer came up with a classy reply and wrote - "I hope you heal”.

I hope you heal https://t.co/TUVoa9hdnh

Krishna produced a brilliant spell in the second ODI as he ran through the West Indies top-order during the visitors' run-chase. He drew the first blood for India in the form of Brandon King before dismissing Darren Bravo in quick succession. He then removed West Indies' stand-in skipper Nicholas Pooran followed by the wicket of Kemar Roach to complete his sensational spell.

Krishna will be looking to continue his fine form with the ball in the third and final ODI of the series on Friday. India have already clinched the three-match series 2-0 and will be going for a clean sweep in the final ODI.