Too much cricket for Team India? Who got how much rest before T20 World Cup 2021 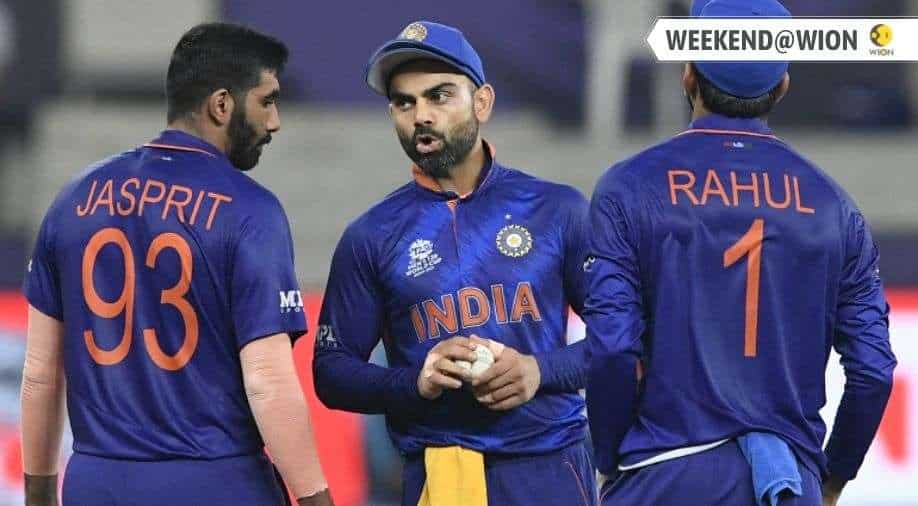 How much rest did Indian players got ahead of the T20 World Cup 2021? Photograph:( AFP )

Bio-bubble fatigue was cited as one of the major reasons behind Team India's flop show at the T20 World Cup 2021. Here we take a look at how much rest did each member of the Indian squad got ahead of the World Cup post the conclusion of IPL last year.

'Absolutely, you need a break," said Jasprit Bumrah in the aftermath of India's loss against New Zealand in the recently-concluded T20 World Cup 2021, when asked if the team would have preferred a bigger break between the second leg of the Indian Premier League (IPL) 2021 and the start of the World Cup in the UAE.

India's campaign got underway less than two weeks after the conclusion of IPL 2021 and it didn't take long for the players to realise the implications of having spent months playing continuous cricket in bio-bubbles across the world. In the past year, the 'new normal' as the bio bubble life has often been labelled as, has taken a massive toll on the mental health of cricketers.

It all started in August last year when the IPL got underway in the UAE after a long hiatus due to COVID-19. The challenges of living in a bubble were quite evident right from the beginning but the excitement of cricket returning after a long gap meant the ill effects were ignored.

But, as India's campaign derailed in the T20 World Cup, the mental health of the players took centre stage. As much as the form and priorities of each player were discussed in the aftermath of India's consecutive defeats in their first two Super 12 matches, mental health was one of the decisive factors in the team's poor start.

Mental health has never been taken as seriously in cricket as it has been in the past few months after the introduction of 'bio-bubbles' to combat the invisible virus. From Ben Stokes taking a break to Indian players and support staff talking openly of the fatigue caused by the bubble life, mental health has become one of the biggest talking points in cricket post COVID-19.

India's campaign in the T20 World Cup 2021 was all but over after their back-to-back defeats against Pakistan and New Zealand in the first two games but they hung on till the end. Only to eventually bow out despite winning the remaining three matches comprehensively.

While they didn't bring home the second T20 World Cup trophy but the tournament did enough to awaken the senses of Indian cricket which has for long ignored mental health and the issues surrounding it. India are one of the most active teams in world cricket and excessive cricket in these tough times can easily become mentally challenging for even the toughest of characters.

Here is a look at how much rest did each of the Indian players got ahead of the T20 World Cup 2021:

Before we start looking at the amount of rest each of the 15 members of the Indian T20 World Cup 2021 squad got ahead of the tournament, we need to take into account the common break periods for the team since IPL 2020.

The IPL 2020 final was played on November 10 and the Indian team had almost no break ahead of the Australia tour which kicked off on November 27 and lasted till January 19 2021. India got a six-day break before the start of the England series at home.

The team then got a break of two weeks after the cancellation of IPL 2021 in May ahead of the England tour and a 21-day break in England in between the World Test Championship final and the start of the Test series. Each of the 15 players were part of the IPL bio bubble in April-May and then September-October.

1) Virat Kohli - The former Indian T20I captain took just one break in between IPL 2020 and the start of the T20 World Cup this year. He missed the last three Tests against Australia due to paternity leave from December 21 to January 27.

2) Rohit Sharma - Rohit Sharma was injured ahead of the start of the Australia tour and had missed the ODI and T20I series Down Under along with the first two Test matches. He was out due to injury from November 11 to December 18.

3) KL Rahul - The Indian opener was ruled out of the Australia Test series after the conclusion of the firs two games and was on an injury break from January 05 to January 28.

4) Suryakumar Yadav - The batter was not part of India's tour of Australia but was in a bio-bubble during the Syed Mushtaq Ali Trophy in India. He got a 45-day break post IPL 2020 ahead of the start of the Syed Mushtaq Ali Trophy. He then played the England series at home but was not part of the England tour and got 40 days rest before the Sri Lanka tour in July. He had then travelled to England post the SL tour.

5) Rishabh Pant - The wicket-keeper batter has been one of the busiest cricketers for Team India and has had no break since the IPL 2020. Pant has been part of each of India's series since the conclusion of the IPL last year without taking any rest.

7) Hardik Pandya - Hardik Pandya was on a break after the T20I series in Australia. He got a rest period of 50 days before the England series at home. He then had a 40-day break ahead of the Sri Lanka tour and a three-week break post that.

8) Ravindra Jadeja - The star all-rounder was out with an injury for 60 days from January 11. His Australia tour was cut short in between. Jadeja made his comeback in the England series at home and didn't get any break till the T20 World Cup 2021.

9) R Ashwin - R Ashwin was also in a bubble continuously throughout the Australia tour before entering another bubble during the England Test series at home. He then was part of the Test squad for the England tour ahead of IPL 2021's second leg and didn't get any break before the start of the T20 World Cup 2021.

10) Shardul Thakur - The Indian pacer didn't get any break from IPL 2020 to the start of the T20 World Cup 2021 this year as he was part of the Australia tour, England series at home, IPL 2021 and the England tour.

11) Mohammed Shami - Shami had an injury break of 90 days after getting ruled out following the first Test against Australia in December. He made a comeback during the first leg of IPL 2021 and stayed in bubbles continuously post that.

12) Jasprit Bumrah - One of India's best fast bowlers at present, Bumrah got a two-week break for his wedding when he left the bio-bubble midway through the England series at home. He has also been one of India's most active cricketers in the past year.

13) Varun Chakaravarthy - The spinner was initially named in India's T20 squad for the Australia tour but ended up missing the tour due to an injury. He was out for four months due to his injury and made his comeback in IPL 2021. Chakaravarthy then got a 40-day break after IPL 2021 was cancelled in May before the Sri Lanka tour. He then got a three-week rest post the SL tour.

14) Bhuvneshwar Kumar - The senior pacer was also out injured for quite a while and had missed the Australia tour entirely. He spent 60 days on the sidelines due to his injury and made his comeback in the Syed Mushtaq Ali Trophy. He then joined Team India's bubble for the England series at home and got the rest of 40 days after that before the Sri Lanka tour. He then got a three-week rest post the SL tour.

15) Rahul Chahar - The spinner got a two-month break post IPL 2020 as he was also not part of the Australia tour. Chahar then got a 40-day break after the IPL 2021 was suspended in May and a three-week break after the Sri Lanka tour.