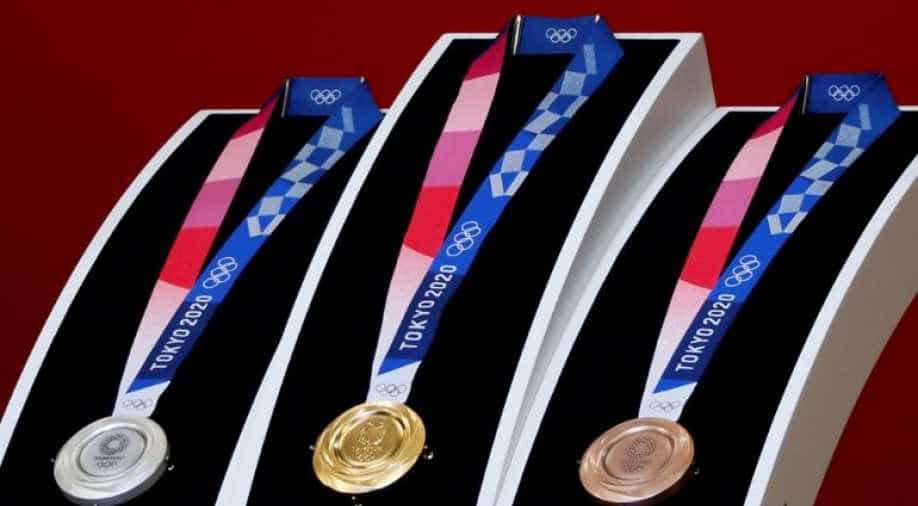 Design of the Tokyo 2020 Olympic medals are pictured during the 'One Year to Go' ceremony celebrating one year out from the start of the summer games at Tokyo International Forum. Photograph:(Reuters)
Follow Us

The unveiling of the medals, designed by Junichi Kawanishi, was the main attraction of an extravagant ceremony in the Japanese capital to commemorate the landmark.

The medals for the Tokyo 2020 Olympics were unveiled on Wednesday with exactly one year to go until next year's Games.

The unveiling of the medals, designed by Junichi Kawanishi, was the main attraction of an extravagant ceremony in the Japanese capital to commemorate the landmark.

The medals, which are 85 millimetres in diameter, feature Greek goddess of victory Nike in their design along with the Olympic symbol and are made from recycled metals, collected from 6.21 million electronic devices donated across Japan.

Abe said he hoped next year's Games would have a similar impact as the 1964 Summer Games held in Tokyo.

"Sports brings the world together and it affords equal opportunities to all. That is what sports are about," said Abe. "Fifty-five years ago we learned that when we hosted it in Tokyo before.

"Next year we want to demonstrate that again and we want this to be an opportunity where we can do that."

Bach reiterated that Tokyo is the best-prepared city he has ever seen ahead of an Olympic Games.

"It will be a wonderful and unique moment for our gracious Japanese hosts. For you to show the world the best of Japan," added Bach.

Organisers believe they are on track to deliver a world-class sporting event next year and with 3.22 million tickets already sold and over 200,000 people applying to be volunteers, engagement in Japan is unprecedented.

The only reminder of the issues in the build-up to the Games on Wednesday was the presence of new Japanese Olympic Committee (JOC) President Yasuhiro Yamashita on stage with Bach and Abe.

Yamashita took over at the JOC last month, following the resignation of Tsunekazu Takeda, who is being investigated for suspected corruption related to the Tokyo 2020 bid.