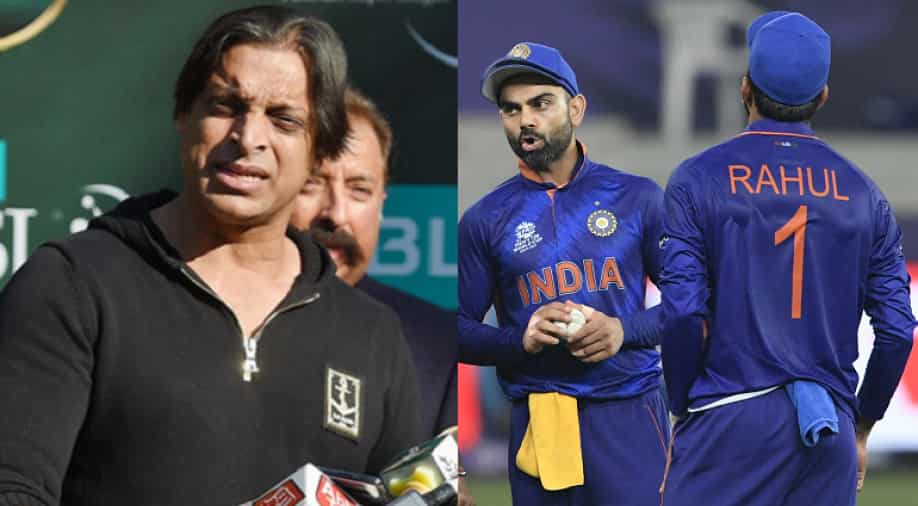 Shoaib Akhtar has claimed there is a rift in the current Indian team. Photograph:( AFP )

Former Pakistan pacer Shoaib Akhtar has made yet another controversial claim, stating that there is a rift in the Indian team and that Virat Kohli didn't quit Test captaincy because he wanted to.

Former Pakistan pacer Shoaib Akhtar has made yet another controversial claim stating that there is possibly a rift in the current Indian team. In the past few months, Indian cricket has witnessed massive changes in the leadership group with Virat Kohli stepping down as captain from all three formats of the game. While Rohit Sharma is now in charge of the white-ball team, the selectors are yet to announce India's next Test captain.

Kohli had announced that he will step down as India's T20I captain after the T20 World Cup 2021 last year before being replaced by Rohit as the ODI captain as well. The move didn't go down well for Indian cricket as Kohli had a public fallout with the BCCI in December last year. The former captain revealed he was informed about the decision of his sacking as ODI captain only ninety minutes before it was made official.

Kohli shockingly announced his resignation from Test captaincy earlier this month, a day after India's 2-1 loss in the Test series against South Africa. While it is no secret that the relations between Kohli and the Indian cricket board have turned sour in the last few months, there have also been speculations of a possible rift in the Indian team.

Former Pakistan pacer Akhtar, who follows Indian cricket closely, believes there is a rift in the Indian team at present and that Kohli's decision to Test captaincy was not his own, as projected.

"I see a rift in this team. Important to see how the team will be handled. I don't think Kohli quit because he wanted to, such a situation was created that he had to leave captaincy. There are a lot of reasons behind Kohli's decision to leave Test captaincy, that I cannot say because of confidentiality," Akhtar said in a video on his YouTube channel.

Akhtar also shared his views on India's 'humiliating' 3-0 defeat in the recently-concluded ODI series against South Africa. India suffered three back-to-back defeats in the series under KL Rahul's captaincy as permanent skipper Rohit Sharma had to sit out due to a hamstring injury.

Akhtar wants the Indian team to regroup well and keep the unrest aside to focus on the challenges ahead. The former Pakistan pacer backed India to bounce back strongly from their debacle against the Proteas.

"The recent performances have left India humiliating. I don't think the Indian team should be losing to such a South Africa team, that too in a demoralizing manner," said Akhtar.

"Moving ahead from this point, the BCCI, Management, captain and the rest of the players will have to regroup. The issues of unrest will have to be put to an end by the management. I didn't see a combined effort by the team in South Africa," he added.

India will next take on West Indies in an ODI series at home starting from next month.