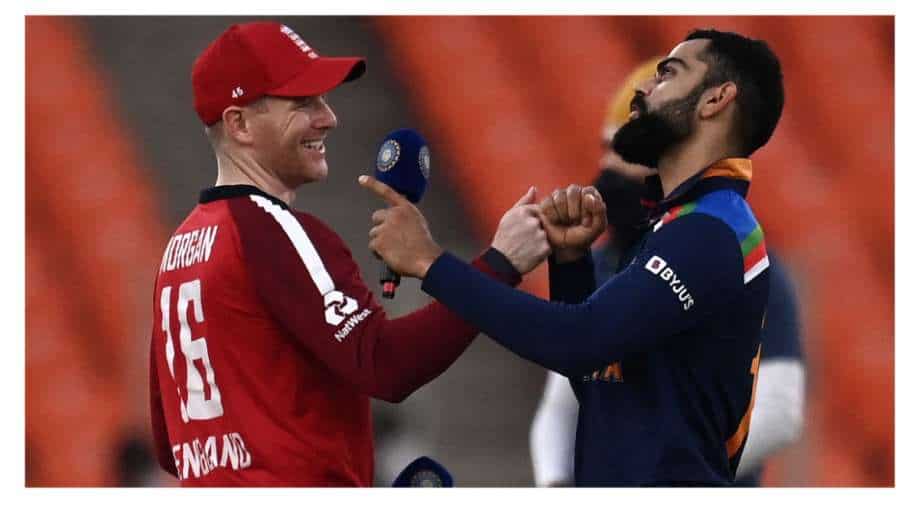 Reactions have been pouring in from the cricket fraternity for Eoin Morgan, who retires as an absolute legend for England cricket in white-ball formats.

It is the end of an era in English cricket as Eoin Morgan confirmed his international retirement on Tuesday (June 28). The ODI World Cup-winning skipper Morgan was expected to remain captain till this year's T20 World Cup, or 2023 50-over showpiece event in India, however, he decided to step aside after a dismal run with the bat for the past year and fitness concerns.

"To call time on what has been without doubt the most enjoyable and rewarding chapter of my career hasn't been an easy decision, but I believe now is the right time to do so, both for me, personally, and for both England white-ball sides I have led to this point," said Morgan in a statement issued by the England Cricket Board (ECB).

Thus, reactions have been pouring in from the cricket fraternity for Morgan, who retires as an absolute legend for England cricket in white-ball formats. The Irish-born swashbuckling left-hander started his career playing for his national side before switching to England. He ended his career with 700 runs in Tests and 7,701 and 2,458 runs in ODIs and T20Is, respectively, including 16 tons overall. Here are some of the reactions on Twitter:

For over 13 years, it's been an absolute pleasure, Morgs 🙌#ThankYouMorgs 👏 pic.twitter.com/sm0D3DV8yT

Congratulations, Eoin Morgan @Eoin16. I have admired & respected your outlook towards the game enormously.What a career & what a transformational leader. Few players have had as much of an impact on the white ball game as you have. Well done, hopefully our paths continue to cross

Thank you, Eoin Morgan. One hell of a captain to take that England squad from 2015 to world champions 🏆pic.twitter.com/IaljjiY7KL

One of the best innings in the World Cup history - 148 from just 71 balls with 17 sixes by Eoin Morgan.pic.twitter.com/PBb9F308el

Morgan changed England cricket after taking over as the limited-overs captain post Alastair Cook's tenure. Under him, England were eliminated in the group stage of the 2015 ODI World Cup, however, he revamped the side in style and led them to their maiden title in the 2019 edition, in England and Wales. England also ended as the semi-finalists in the 2017 Champions Trophy and last year's T20 World Cup in the UAE. The Three Lions also ended as runners-up in the 2016 T20 World Cup, in India; depicting their success under the Ireland-born cricketer.

Morgan achieved several laurels as a batter for England, ending as their leading run-getter in both ODIs and T20Is, however, his biggest contribution has been in inspiring the white-ball sides into playing a fearless and attacking form of cricket. The left-hander also led Kolkata Knight Riders (KKR) to their third IPL final during the 2021 edition.