Tennis: 'I am trying to reach the top': Novak Djokovic ahead of the historic Wimbledon campaign 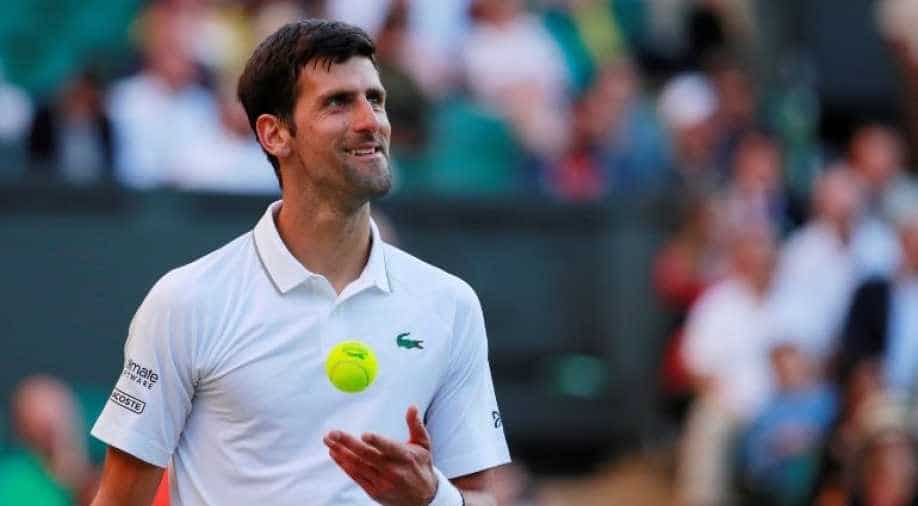 Novak Djokovic has a genuine shot at turning into the first man in the Open Era to finish a Calendar Golden Slam-winning every one of the four Majors.

Novak Djokovic is good to go to start his mission at Wimbledon, where he is the reigning champion. He comes into the competition on the rear of title wins at both the Majors to have occurred in 2021 up until now. He has a genuine shot at turning into the first man in the Open Era to finish a Calendar Golden Slam-winning every one of the four Majors.

While addressing the media ahead of his first Wimbledon match, Novak Djokovic conceded that the errand would require a stupendous physical and mental exertion from him. He likewise asserted that staying in the moment would be pivotal in the event that he needs to satisfy his goals.

"My confidence is pretty high, having won two Majors. Roland Garros took a lot out of me, mentally, physically, and emotionally, but it brought me a lot of positive energy as well. The biggest task is how to stay in the present moment," he said

"There is always something on the line for me, Roger or Rafa when it comes to tennis history," he added

He reacted that he was unable to remark on what his viewpoint would be if he somehow happened to have 20 Slams, prior to adding that he wanted to discover soon. He said: "Well, I have 19 Grand Slams, so I know what the outlook is at 19. At 20, I don't know. Hopefully, I can find out in a few weeks, but let's see."

Novak Djokovic, at that point, repeated that Grand Slams hold the priority need for him right now and that he needed to make a move to win Majors that come in his direction.

"Grand Slams are the biggest motivation I have right now, this stage of my career. I want to try to make the most of the Grand Slams. I am trying to reach the top. I have achieved it throughout my career. I have been fortunate to play my best tennis when it mattered most, I think."

Novak Djokovic will play his first match against adolescent sensation Jack Draper in his competition opener on Monday. Djokovic, who is competing for a third sequential title at Wimbledon, has never confronted Jack Draper. The youngster is positioned No. 250 in the world.

Jack Draper doled out a noteworthy execution at Queen's previous this month. He crushed Jannik Sinner and Alexander Bublik at the occasion while heading to the quarterfinals.

Novak Djokovic conceded on Saturday that he hasn't seen a lot of Jack Draper previously and that he needed to pick Jannik Sinner's cerebrum about what's in store from the youngster. Novak Djokovic likewise brought up that Jack Draper would have a lot of help from the London spectators, which is the reason he is taking the match very seriously.

"I don’t know too much about Draper, I asked Sinner a few questions about his game," Djokovic said. "I have to do my homework, watch some videos of his performance in Queen's. He is going to have people behind him, it can be tricky, he doesn’t have much to lose. I am taking it very seriously."