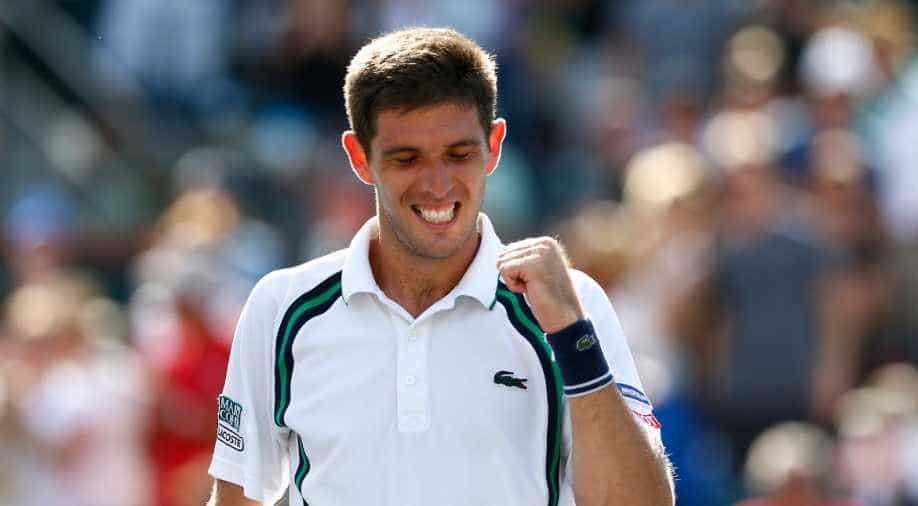 Delbonis was beaten by Cilic in five sets in Friday's first singles match but blew away the 37-year-old Karlovic, an opponent ranked 21 places above him, in just over two hours. In photo: Federico Delbonis of Argentina on March 14, 2016. Photograph:( Getty )

Juan Martin del Potro, cheered on by Argentine football legend Diego Maradona, staged an incredible comeback from two sets down to beat Marin Cilic in the opening reverse singles to level the tie at 2-2.

Left-hander Delbonis then tamed the big-serving Karlovic as Argentina, runners-up on four previous occasions, became just the 15th country to lift the trophy in 116 years.

"This is one of those dreams that has come true," said Delbonis.

"I tried to keep focused to do what I had to do, that's all I could think because if I thought about anything else it would be a disaster."

Delbonis was beaten by Cilic in five sets in Friday's first singles match but blew away the 37-year-old Karlovic, an opponent ranked 21 places above him, in just over two hours.

The world number 41 broke Karlovic -- the oldest player to feature in a Davis Cup singles match since 43-year-old Australian Norman Brookes in 1920 -- four times to help Argentina banish the memories of losing finals appearances in 1981, 2006, 2008 and 2011.

But much of the credit will go to Del Potro after the Olympic silver medallist, who missed the majority of 2014 and 2015 through injury, outlasted Cilic in an epic five-hour battle of former US Open champions.

"I was positive all the time and did not let my head drop after going two sets down," said Del Potro.

"This was an emotionally exhausting match and one of the biggest wins of my career."

Del Potro had defeated Cilic in eight of 10 previous meetings, but Sunday's clash was the first since 2013 and the Croat was invigorated by an animated Zagreb Arena crowd.

Sixth-ranked Cilic dominated a first set tie-break, winning the first five points to seize control, and then broke Del Potro's serve twice in succession in the second set to move Croatia within sight of a second title.

But Del Potro, who rallied from behind to overcome Andy Murray in a five-set epic in the semi-final, displayed more remarkable resilience and produced an outrageous 'tweener' to begin the third set.

Cilic fought off two early break points but then succumbed to nerves as the finish line approached, falling 0-40 behind on serve at 5-6, and Del Potro pounced at the third opportunity to reignite his country's hopes.

Del Potro's blistering forehand piled the pressure on Cilic, and the Argentine sent the match to a fifth set by converting his third set point after his opponent again faltered on serve at 5-4.

Del Potro committed a costly double fault to gift Cilic the advantage at the start of the deciding set, but the world number 38 hit straight back in the following game to level.

The Argentine then conjured up a pair of break points at 4-3 with a miscued forehand from Cilic paving the way for Del Potro to complete a stunning fightback -- his first ever from two sets down -- in four hours and 53 minutes.

"I am very disappointed but I have no regrets because I gave all I had and it was just one of those days when it didn’t come off."