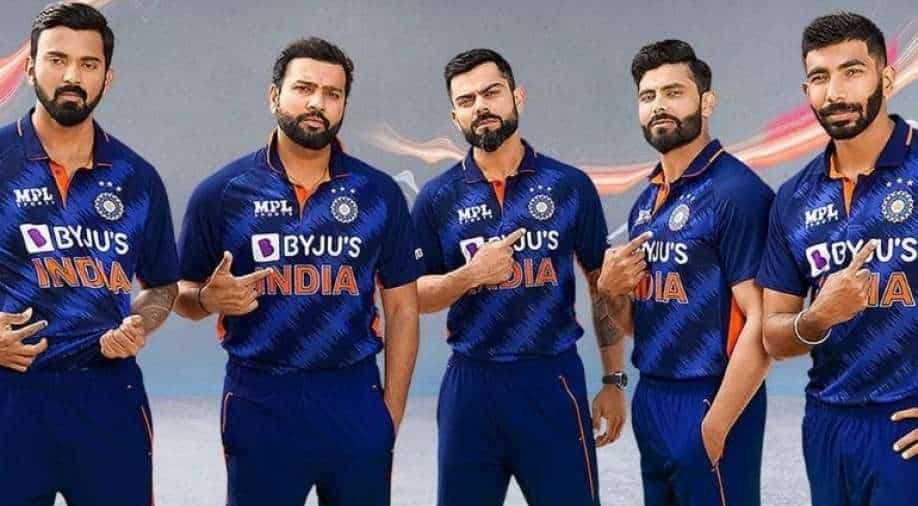 President of BCCI Sourav Ganguly said that new jersey is a great way to celebrate fans' excitement and energy.

Sourav Ganguly, president of the Board of Control for Cricket in India (BCCI), stated on Wednesday that the Indian men's team jersey, which was unveiled ahead of the T20 World Cup, is the greatest way to commemorate fans and supporters' excitement and energy.

On Wednesday, the Indian team's official jersey for T20 World Cup, which will kick off on Oct 17, was unveiled. The cheers of the team's billion-plus supporters at home and abroad inspired the design of the jersey that the players will wear at the next T20 World Cup.

This is the first time in Indian cricket history that supporters have been honoured on a jersey. It contains their yells and cheers from memorable previous matches, which have been converted into distinctive soundwave patterns.

Fuelled by the billion blessings, Team India is ready to don the new jersey and bring out their A-game. 🇮🇳

The jersey dubbed the "Billion Cheers Jersey," not only honours their constant support, but it also acts as a source of motivation and encouragement for Team India to perform at their best on the field.

The Prussian blue and royal blue jersey has a striking and unique appearance that is deserving of champions. "The Indian cricket team enjoys support not just in India but around the world, and there`s no better way to celebrate their excitement and energy than through this jersey”, said Sourav Ganguly, President of the Board of Control for Cricket in India (BCCI).

''This will undoubtedly provide the team with the much-needed enthusiastic support in their quest to emerge as the T20 champions of the world. We are also pleased to see that MPL Sports continues to deliver merchandise that is widely affordable and accessible", he further added.

The Board of Control for Cricket in India (BCCI) Secretary, Jay Shah, remarked, "We are excited to unveil the official jersey today and make it available for supporters ahead of the T20 games in partnership with MPL Sports. The story behind the jersey is the story of every Indian cricket fan. We are sure that wearing this will be a matter of great pride for both the team and supporters alike."

The Indian National Cricket Team's captain, Virat Kohli, said the jersey's design is "quite starking." "We have immense respect for our fans and this makes the official jersey even more special. The design is quite striking and distinct from the ones we have sported in the past while also delivering on comfort and performance to enable us to give our best. All of us are thrilled to don the new colours, show our game and make our billion-plus fans proud," he said.