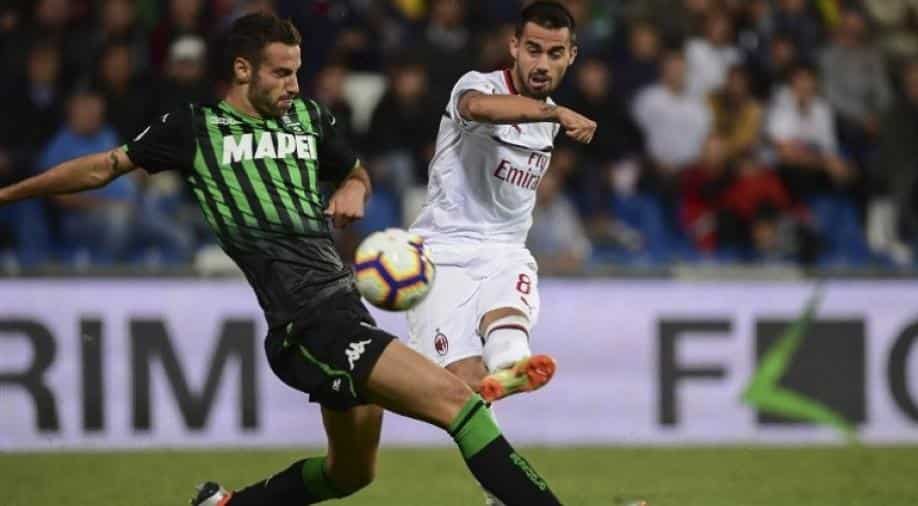 Spanish midfielder Suso scored a brace to end his Serie A goal drought as AC Milan got back to winning ways.

Spanish midfielder Suso scored a brace to end his Serie A goal drought as AC Milan got back to winning ways after three consecutive draws with a 4-1 success which thwarted Sassuolo's bid to go second in Serie A on Sunday.

Champions Juventus had maintained their perfect start to the season on Saturday with a 3-1 win in their top-of-the-table clash with Napoli who remain in second place.

Juventus, with a maximum 21 points after seven games, are six points ahead of Carlo Ancelotti's team.

AC Milan needed to win to avoid losing further ground on their rivals, with Inter Milan, in fourth, after a 2-0 win over Cagliari, and AS Roma, in eighth, after a 3-1 derby win over city rivals Lazio.

Sassuolo dropped to fifth, equal on 13 points with Fiorentina and Inter Milan. AC Milan's victory came despite the absence of star striker Gonzalo Higuain with forwards

Patrick Cutrone and Fabio Borini also missing with ankle injuries.
Suso scored his first league goal since February five minutes after the break in Modena after Ivorian Franck Kessie had put Milan ahead with a brilliant solo run on 39 minutes.

Samu Castillejo added a third on the hour mark for Gennaro Gattuso's side before Filip Djuricic pulled one back for the hosts.

Suso got his second goal four minutes into stoppage time after consultation with the video assistant referee (VAR).

But their hopes were jolted just after the hour when referee Paolo Valeri pointed immediately to the penalty spot, refusing to consult VAR despite Federico Chiesa going down easily from Rafael Toloi's challenge.

Jordan Veretout stepped up to slot the ball past Pierluigi Gollini after 63 minutes, and Fiorentina cemented the win when Cristiano Biraghi doubled their lead in stoppage time.

"He shouted at me that the penalty was non-existent," said Pioli.

"They gave a penalty against us for a fingertip against Inter, so this time they gave one in our favour for light contact," added Pioli, whose side lost to Inter Milan midweek.

"We were tenacious, a little lucky."

Elsewhere, Polish striker Krzysztof Piatek became the first Serie A debutant in 68 years to score eight goals in the opening six games when he hit a brace for Genoa, who have a game in hand, in a 2-1 win over Frosinone.

Piatek got his first after 33 minutes, adding a second three minutes later. Camillo Ciano gave promoted Frosinone their first goal of the season when he converted a penalty four minutes before the break.

Torino got back to winning ways with substitute Simone Zaza sealing a late winner against tailenders Chievo.

Federico Santander scored one and set up substitute Riccardo Orsolini as Bologna came from behind to beat Udinese 2-1.

Ivory Coast forward Gervinho got his third goal in five games as Parma edged Empoli 1-0, in a showdown between two promoted teams. Empoli were twice denied by the woodwork.