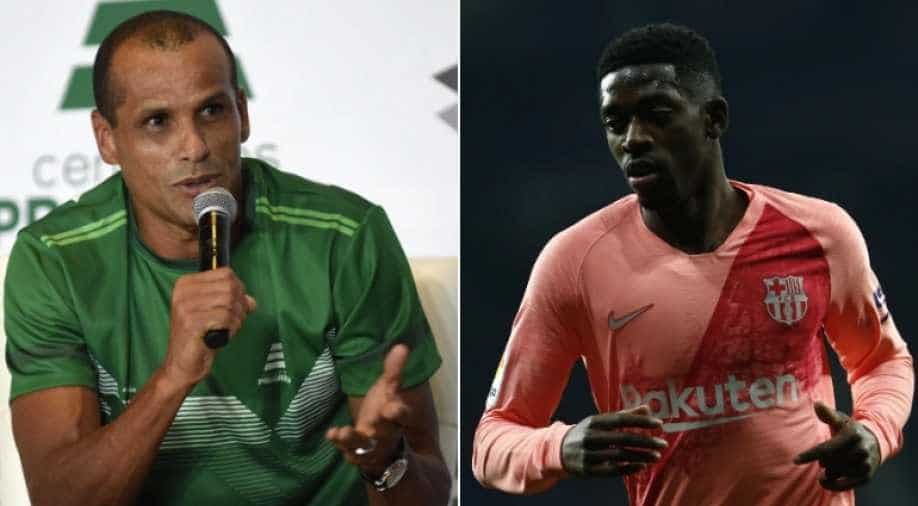 Dembele, who joined Barcelona in August 2017 for 105 million euros ($119.45 million), suffered injury problems in his first year and this season has been criticised for his behaviour, including turning up late to training and events.

Barcelona winger Ousmane Dembele needs to improve his attitude and focus on being more professional even if he does want to leave the La Liga leaders, the club's former championship winning player Rivaldo has said.

Dembele, who joined Barcelona in August 2017 for 105 million euros ($119.45 million), suffered injury problems in his first year and this season has been criticised for his behaviour, including turning up late to training and events.

Media reports have linked the 21-year-old with a move away from the Nou Camp during next month's transfer window.

Brazilian Rivaldo, who played for Barca for five years from 1997 and is regarded as one of the most skilful attackers of his generation, said there was no doubting the Frenchman's talents.

Dembele has only scored 12 goals for Barca but several of those have been important strikes in the league, the Spanish Super Cup and the Champions League.

"Ousmane Dembele's situation at Barcelona is upsetting because he's already shown that he can play very well, score goals and be an important member of the team," Rivaldo, who won the World Cup with Brazil in 2002, told Betfair.

"He just needs to focus on being a little more professional and to stop being late for training sessions.

"This is not the correct mentality for someone potentially trying to leave Barcelona. It's always strange to hear that someone might want to leave a big club in this way.

"If he wants to leave, he must prove his value by playing well and not missing training sessions to recover his credibility as a professional. That will generate interest from other clubs. If he doesn't change, he is hurting himself more than the club."

Reports in the Spanish media said that Dembele arrived two hours late for training on Sunday after Barca's 4-0 league win over Espanyol the previous evening.

He may get a chance at redemption later on Tuesday when Barcelona take on Tottenham Hotspur in Group B of the Champions League. Ernesto Valverde's side has already qualified for the last 16 as group winners ahead of the final matchday, but Rivaldo said that his former team should be wary of Spurs who need a win to guarantee a place in the next round.

"With Barcelona already through to the knockout stages, and with the added possibility of them rotating their team, Spurs will have a bigger chance to upset them, but it won't be easy to win at Camp Nou," the former world player of the year added.

"Barca could become more vulnerable if they change anything in defence because Tottenham are such a talented attacking team. Players that have had fewer minutes on the pitch compared to the usual starting XI will naturally concede more chances."

Rivaldo lifted the Champions League trophy with AC Milan in 2003 but tipped the Catalans as favourites for this year's competition, just ahead of record 13-times winners Real Madrid and Premier League champions Manchester City.