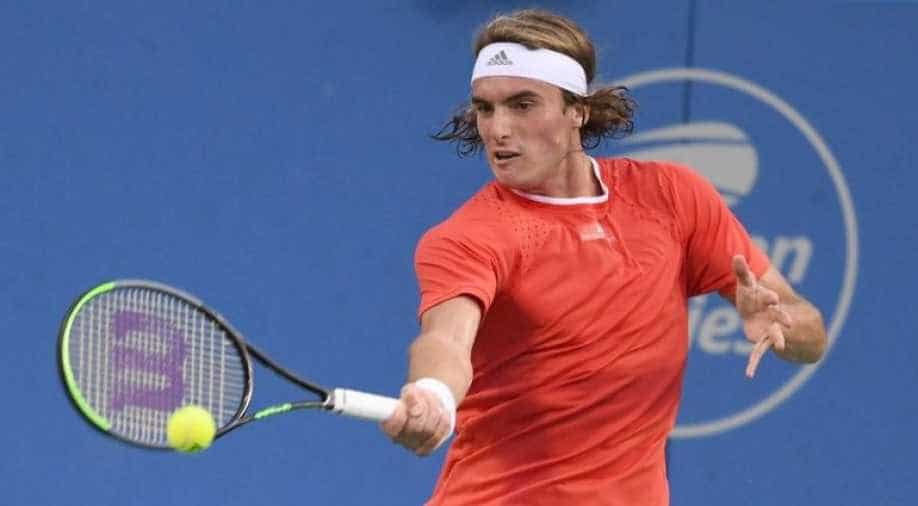 Along with the likes of Alexander Zverev and Daniil Medvedev, Tsitsipas is frequently mentioned among the new generation challenging the supremacy of the 'Big Three'

Rising star Stefanos Tsitsipas only turned 21 last month and is the youngest player in the world's top 10 -- but he refuses to be intimidated.

Last weekend, the Greek tyro played doubles alongside Roger Federer and Rafael Nadal at the Laver Cup, the latest step in his fast ascent, although he lost both matches.

That daunting but ageing duo, along with Novak Djokovic, have reigned over men's tennis for 15 years, but Tsitsipas is not content to wait for them to retire before he takes his chance.

Along with the likes of Alexander Zverev and Daniil Medvedev, Tsitsipas is frequently mentioned among the new generation challenging the supremacy of the "Big Three".

"In order to get higher in the rankings, we have to surpass them and it's quite a difficult task," the world number seven told AFP at the Zhuhai Championships.

"But we are working on it, by 'we' I mean the young guys.

"As my slogan goes, don't wait for an opportunity, create it.

"So I like to go after that and I don't think it's right to wait because you kind of surrender when you wait."

Despite his tender years, Tsitsipas has already racked up more than $6 million in career earnings and won three ATP Tour titles. Two came this year.

He is the top seed in Zhuhai, southern China, where he was to play France's unseeded Adrian Mannarino later Thursday.

His life has changed as his fame has grown.

When Tsitsipas walks the streets of his native Greece, he is now surrounded and children there are beginning to take up tennis because of him.

It is perhaps a little fanciful, but a friend recently told him that he is now the most famous name in Greece behind Coca-Cola.

If that sounds boastful, Tsitsipas does not intend it to be.

"It's good, obviously, but it's too soon to be there, too soon," he repeated, adding that he still has "a lot to improve, a lot to achieve".

Tsitsipas, who lost to Nadal in the semi-finals of this year's Australian Open -- his best performance in a Grand Slam -- made another comparison about his swift rise that he is more comfortable with.

Again, the young Greek stressed that he was not trying to show off, "but people compare it to 1980 when Greece produced Nikos Galis, the basketball player, who at that time was the most popular, famous athlete in Greece.

If Galis, now 62, is part of Greece's sporting folklore, the floppy-haired Tsitsipas wants to be its future.

After losing to Djokovic in the final of the Madrid Open in May, the world number one told Tsitsipas: "You are definitely a new star in tennis."

The young Greek, whose parents were both tennis players and his father is now his coach, is at ease with that tag rather than intimidated by it.

"I am honoured that many players and people and everyone says that I'm the next thing because I remember years ago when no one would really talk about me," he said.

"It's nice to see that change and see myself growing as a player, and respected and also talked about."