'Started training to get me out already?': When India U-19 pacer asked Virat Kohli about his weakness 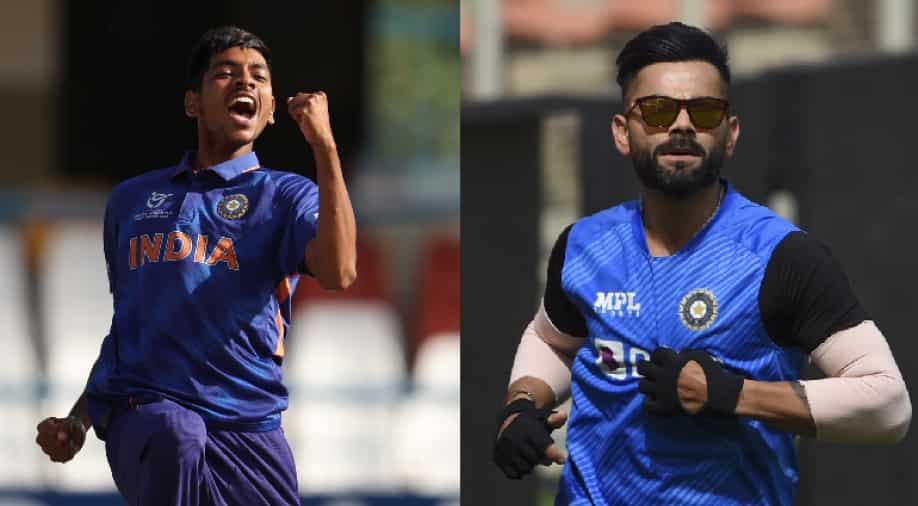 Virat Kohli was asked about his weakness as a batter by India U-19 star Ravi Kumar. | Photo - BCCI/AFP | Photograph:( Others )

Virat Kohli stumped India U-19 pacer Ravi Kumar with his witty response after being asked about his weakness during an interaction ahead of the recently-concluded ICC U-19 World Cup 2022 final.

Team India superstar Virat Kohli had recently interacted with the players of the Indian U-19 team ahead of their final clash against England in the recently-concluded ICC U-19 World Cup 2022. India went on to beat England by four wickets in a thrilling final in Antigua to lift the U-19 World Cup trophy for a record-extending fifth time.

It was a memorable tournament for the young guns, who went to become champions while remaining unbeaten in the tournament. The Yash Dhull-led side bowled exceptionally well in the final to bundle out England for 189 runs and chased down the target with 2.2 overs to spare.

In the lead up to the final, Kohli took some time out from his busy schedule to catch up with the U-19 players and gave them some valuable inputs ahead of the final. During the interaction with Dhull & Co., Kohli was asked about his weakness by young fast bowler Ravi Kumar. The former India captain came up with a witty reply to the left-arm seamer.

Ravi himself opened up about his interaction with Kohli ahead of the final and revealed the former India captain jokingly asked him if he had already started training to get him out when the youngster queried about his weakness as a batter.

“I asked him what is his weakness. And he replied, ‘kyun abhi se out karne ki training kar raha hai kya’ (Why? Have you started training to get me out already, laughs)?,” Ravi told the Indian Express.

Earlier, India U-19 captain Yash Dhull had said the interaction with Kohli ahead of the final had helped in boosting the morale of the squad. Kohli, who is regarded as one of the best batters of the generation, himself led India to a memorable triumph at the U-19 World Cup in 2008.

He soon made his international debut for the Indian team and went to establish his credentials as one of the greatest ever. Kohli is also the most successful captain for India in Tests with 40 wins from 68 matches. He recently stepped down as the Test captain of the side and is no more the skipper across any format of the game.