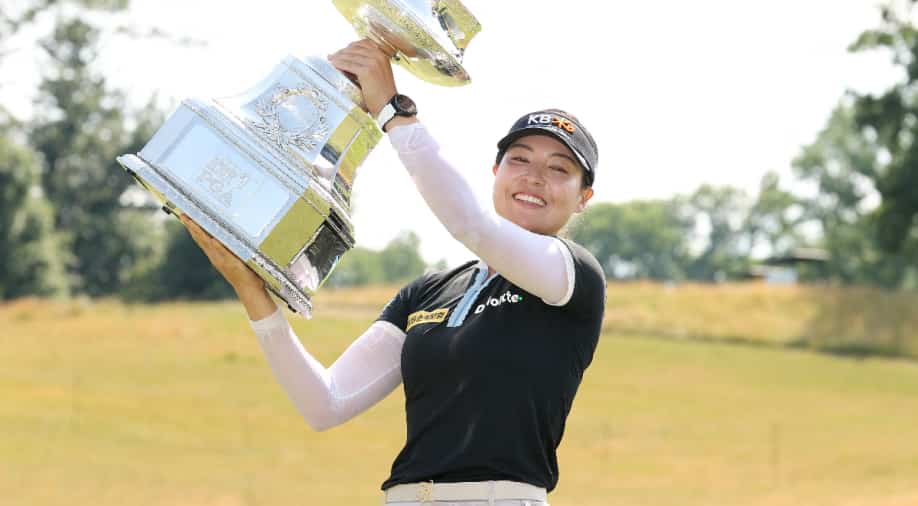 Chun In-gee captured her third major title on Sunday, winning the Women's PGA Championship to claim her first major since 2016 and snap a victory drought of almost four years. The 27-year-old South Korean fired a three-over-par 75 in windy conditions at Congressional Country Club in Bethesda, Maryland, to finish 72 holes on five-under 283.

That was good enough for a one-stroke triumph over American Lexi Thompson and Australian Minjee Lee to take the $1.35 million top prize from a record $9 million purse.

"It just means a lot because I didn't have any wins for almost 3 1/2 years," Chun said, her voice cracking with emotion. "My loyal fans in Korea, they never gave up on me no matter how I did."

Chun, ranked 33rd, had not won since October 2018 at the Hana Bank Championship in South Korea, a 76-event worldwide winless streak.

But after squandering what had been a three-stroke lead when the day began, Chun added a third career major trophy after the 2015 US Women's Open and 2016 Evian Championship.

Chun dominated the first two rounds and led by as many as seven strokes before struggling to 75s in each of the final two rounds while sixth-ranked Thompson charged.

Thompson, however, could not end an eight-year major win drought since her 2014 Kraft Nabisco Championship trophy at age 19 or a three-year overall victory drought.

The American settled for her 11th top-five major finish since capturing her first major victory and her fourth major runner-up effort.

Thompson, tied for the lead with Chun at the par-4 17th, made a three-putt bogey to give the Asian star a one-stroke lead as they reached the 72nd hole of the week.

At the par-4 18th, Chun went into back greenside rough with her approach while Thompson had a long birdie putt. Chun rolled her putt over a ridge and five feet past the cup while Thompson two-putted for par, leaving Chun one last putt for the title.

Chun calmly rolled in the tension-packed putt and pumped her right fist as the ball fell into the cup and gave her a third career major title.