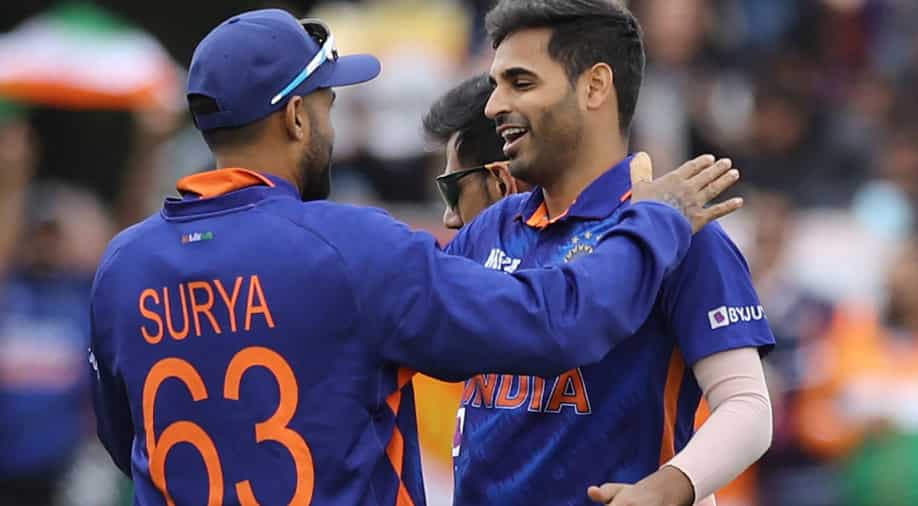 Bhuvneshwar Kumar seemed to have clocked 201 kmph vs Ireland but it was a speed gun error. Photograph:( AFP )

Fans were left baffled on Twitter after Indian pacer Bhuvneshwar Kumar bowled a '201 kmph' delivery in the first T20I against Ireland on Sunday (June 26).

Fans were left baffled on social media after Indian pacer Bhuvneshwar Kumar bowled a '201 kmph' delivery in the first T20I against Ireland in Dublin on Sunday (June 26). Bhuvneshwar was once again the pick of the bowlers for the Indian team after producing an economical spell in the rain-affected 12-overs-per-side contest. He finished with excellent figures of 1/16 as India restricted Ireland to 108/4 and won the game by 7 wickets.

While Bhuvneshwar was lauded by many for his bowling exploits, fans were left stunned after witnessing the Indian pacer cross the 200 kmph barrier during the game. Former Pakistan pacer Shoaib Akhtar holds the record for bowling the fastest delivery in international cricket at 161.3 kph.

Also Read: 'Had a chat with him': Hardik explains why Umran Malik bowled only 1 over in 1st T20I vs Ireland

While his first delivery was recorded at 201 kmph, the second one went up to 208 kmph resulting in hilarious reactions from fans on Twitter. While some compared Bhuvneshwar to the likes of Akhtar and India's latest pace sensation Umran Malik, some had a laugh at the expense of the speed gun error.

While the two deliveries created a lot of buzz on social media due to the peed gun error, it was a terrific first over from Bhuvneshwar Kumar against Ireland where he conceded just 1 runs and picked up the wicket of Andrew Balbirnie. With the dismissa, Bhuvneshwar also achieved a new milestone in his international career as he became the bowler with highest wickets in Powerplay in T20I history.

After restricting Ireland on 108 runs, India chased down the target with 16 balls to spare to register a comfortable seven-wicket win. Deepak Hooda slammed an unbeaten 47 while Ishan Kishan (26) and Hardik Pandya (24) played crucial knocks to hlep India chase down the target of 109 runs easily and take 1-0 lead in the two-match series.