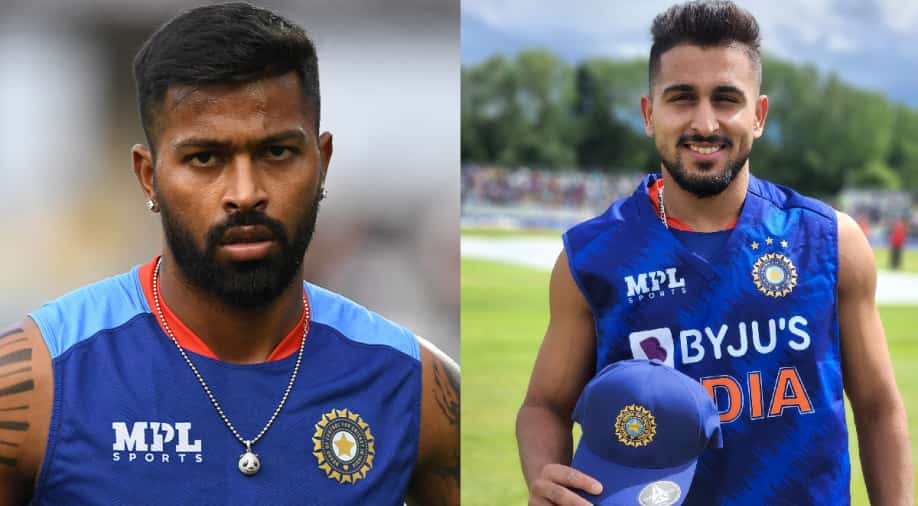 Hardik Pandya explained why Umran Malik bowled only one over in 1st T20I vs Ireland. | Photo - AFP/BCCI | Photograph:( Others )

Young pace sensation Umran Malik made his dream debut for India in the 1st T20I against Ireland on Sunday (June 26) but got to bowl only one over in the game.

Umran Malik made his dream debut for the Indian team in the first T20I against Ireland in Dublin on Sunday (June 27). It was a proud moment for the young pace sensation who became only the second cricketer after Parvez Rasool from his state Jammu & Kashmir to represent India in international cricket. Umran had earned his maiden India call-up in the T20I series against South Africa at home earlier this month after impressing for Sunrisers Hyderabad (SRH) in the Indian Premier League (IPL) 2022.

Umran, who was retained by Sunrisers Hyderabad ahead of IPL 2022, went on to have a memorable season for the franchise with 22 wickets in 14 matches. He left many impressed with his raw pace and consistently clocked over 150 kmph with the ball to rattle the opposition batters.

Umran was expected to go full throttle against Ireland in the first T20I on Sunday after making his dream debut. However, he got to bowl only one over in his debut match for the Indian team and was taken off by captain Hardik Pandya after giving away 14 runs off the over. Umran bowled the 6th over during Ireland's innings in the rain-affected game.

Also Read: Mayank Agarwal called up as cover for Rohit ahead of India's rescheduled 5th Test against England

He was taken to the cleaners by Harry Tector, who was the top scorer for Ireland with a quickfire 64 off 33 balls. Umran didn't get to bowl again in the 12-over-per-side match as India restricted Ireland to 108/4 in 12 overs. Following the conclusion of the game, skipper Hardik was asked about Umran and he explained why the young pacer bowled just one over in the game.

Hardik revealed he had a chat with Umran on the field and felt it was best for him to bowl with the old ball and not the new one. "Great to start a series with a win. For us, as a team, it's very important to start with a win. Quite happy with it. He's [Umran Malik] been fantastic for his franchise. But I felt, also had a chat with him, he'll be more comfortable with the older ball," said Hardik.

After restricting Ireland on 108 runs, India chased down the target with 2.4 overs to spare as Deepak Hooda starred with the willow. Opening the batting with Ishan Kishan, Hooda scored an unbeaten 47 off 29 balls and combined with his opening partner Kishan (26), and skipper Hardik (24) to take India home comfortably in the run-chase.

India won the first T20I by seven wickets to take a 1-0 lead in the two-match series and will be looking to clean sweep the series 2-0 when they take on the hosts in the second T20I in Dublin on Tuesday (June 28).