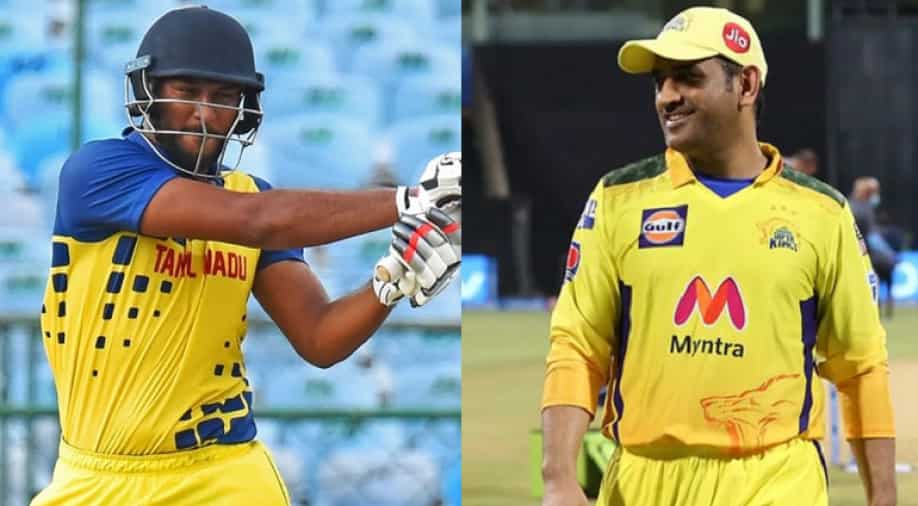 Shahrukh revealed an advice from Dhoni which helped him pull off thrilling win for TN. | Photo - IANS/IPL | Photograph:( Others )

Tamil Nadu batter Shahrukh Khan revealed how an advice from MS Dhoni helped him during the thrilling run-chase in the Syed Mushtaq Ali Trophy final against Karnataka on Monday.

Shahrukh Khan was Tamil Nadu's hero as he helped them clinch the Syed Mushtaq Ali Trophy (SMAT) 2021 title with a stunning cameo in the final on Monday (November 23). Shahrukh slammed a six off the last ball of the match to take Tamil Nadu over the line in the 152-run chase and win the final four wickets to successfully claim the prestigious trophy.

Shahrukh played a match-winning cameo of 15-ball 33 laced with three sixes and a solitary four to win it on the last ball for Tamil Nadu. He revealed how he remembered a piece of advice from the legendary MS Dhoni during the run-chase which helped him pull off the thrilling victory for his team.

Dhoni is regarded as one of the greatest finishers in white-ball cricket and has produced several match-winning knocks for India and his Indian Premier League (IPL) side Chennai Super Kings (CSK) over the years. Known for keeping his cool in the most difficult situations, former India captain Dhoni bailed the team out of trouble on numerous occasions with the bat.

Shahrukh, who walked in to bat at no.6 for Tamil Nadu in the final against Karnataka on Monday, recalled a piece of advice from Dhoni while he was batting out in the middle. Tamil Nadu were reeling at 95/4 in the 16th over with 57 runs required to win when Shahrukh had walked in. The youngster said he wanted to take the game deep and see whatever happens.

“We needed around 50-55 (57 exactly) when I went out to bat. I just wanted to take a couple of balls’ time. I knew the fast bowlers had a few overs left. I knew the equation was a bit out of hand. I said that we will take it as deep as possible, whatever happens,” Shahrukh was quoted as saying by Sportskeeda.

He revealed Dhoni had told him to trust his skills and ability when finishing games and that's what he did on Monday when Tamil Nad were in trouble against Karnata in the final.

“MS [Dhoni] told me to trust myself. He told me that whatever I do is the right thing because only I know what is right. And, if anything wrong happens while playing the game my way, so be it,” Shahrukh recalled.

Meanwhile, Dhoni was seen watching the final in Chennai as Shahrukh played an epic knock to take Tamil Nadu to a memorable win. CSK shared a picture of their captain glued to the television screen with Shahrukh batting in front on him in the Syed Mushtaq Ali Trophy final.