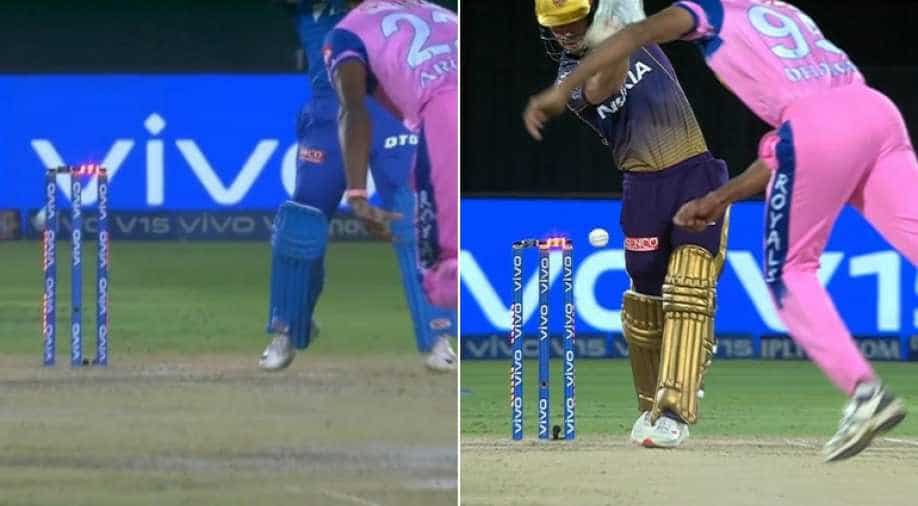 The twelfth edition of Indian Premier League will be remembered for the love-hate relations of the bails and balls and there have been so many incidents when a full pace delivery failed to wipe off the bails.

From Dhawal Kulkarni to Jofra Archer, bowlers have been denied a clean wicket just because the stubborn bails refused to come off the stumps.

Rajasthan team, which have had a disappointing run so far this season, has been shadowed by the poor luck as they have been denied wickets three times just because the bails did not remove.

Talking about the poor luck, then not just the 'bail saga', the Rajasthan team also fell prey to 'Mankad' controversy earlier this season when their batsman Jos Buttler was run out by Punjab's skipper Ravichandran Ashwin at the non-striker's end.

Here's a list of all incidents when bails played the real game in the IPL 2019.

In Match 12, MS Dhoni survived a scare when bails proved lucky for the batsman.

It was the first-leg match between Chennai and Rajasthan, Jofra Archer was denied a clean wicket of MS Dhoni.

In the first innings, when Chennai were batting, even Archer's 142.7kph ball failed to wipe off the bails in the 6th over.

Dhoni defended the ball but it ended up going through his legs and touched the stumps but even the lights did not light up.

The commentators were shocked as how come a speedy ball failed to blow the stumps.

WATCH: Thala Dhoni effect? When even bails refused to fall

The incident happened when Punjab's batsman KL Rahul made the luckiest escape when MS Dhoni failed to run him out in a match between Chennai and Punjab (Match 18).

In the 13th over of Punjab innings, Rahul's missed sweep saw Dhoni flick the ball on to the stumps but the bails didn't come off, though, the LED lights lit up, ensuring the batsman survived despite being short of his crease.

Another incident happened in the match between Kolkata and Rajasthan (Match 21) in the second innings, when Kolkata were chasing a 140-run target.

when he inside-edged a delivery from paceman Dhawan Kulkarni onto his stumps and started walking off without bothering to look behind.

Kulkarni was celebrating too but it was soon cut short when the bowler realised that the ball had lit up the zing bail but failed to dislodge it, ricocheting off the leg stump to the fine-leg boundary for a four instead.

Lynn went on to make 50 runs off 32 balls and Kolkata won the match by eight wickets.

#KKRvsRR Chris Lynn may have been lucky during that match, but clearly, whether or not the bails fell off, the ball did hit the stumps and thus it should've been an out. pic.twitter.com/q89PVeiZ0q

In the Match 41, which was between Delhi and Rajasthan the bail saga continued when Jofra Archer experienced a similar fate as his super speedy delivery failed to remove the bails.

The pacer was proved unlucky when the bails refused to come off on Archer's full toss delivery that saved Rishabh Pant's wicket in the 16th over.

The bails though lifted for a microsecond but did not leave the stumps.

It was a full-toss and it hit the stumps on full, bail lifted for a wee bit but then it came back in his position. Jofra Archer can't believe it.

It has become a trend in IPL 12 where bails have denied bowlers a clear wicket and Archer has been the most unlucky pacer in that regard.
Firstly it was MS Dhoni #match12
Now it's Prithvi Shaw #match40 pic.twitter.com/Rh2nKPhOWZ

Archer suffered the poor fate twice in the IPL 2019.