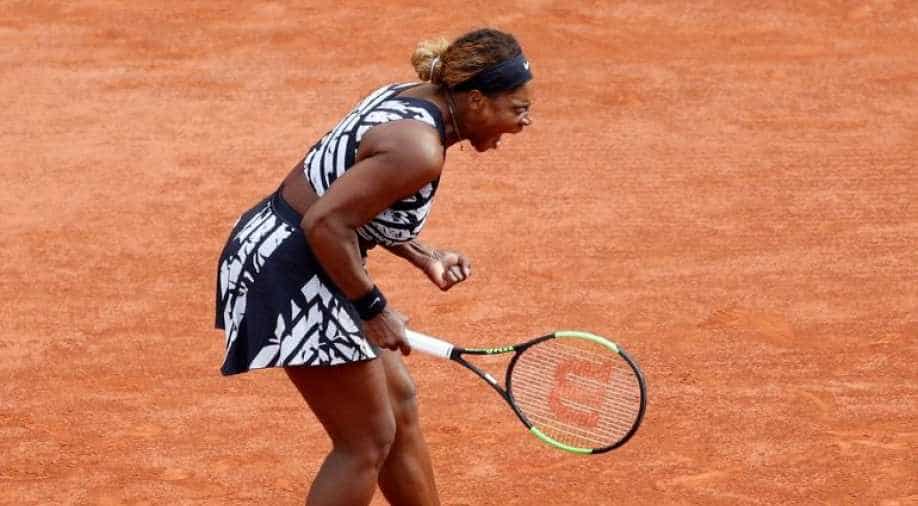 Serena Williams of the US. Photograph:( Reuters )

On her cape, the legend of 'mother, champion, queen, goddess' was written in French

Former world number one Serena Williams entered the second round of French Open after she recovered from a poor first set to win 2-6, 6-1, 6-0 on Monday.

More than her performance, Serena's dress made headlines at the Roland Garros as she chose a bold outfit for her first-round match against Russia’s Vitalia Diatchenko.

Serena wore the Nike-backed black-and-white cape when she entered the court and when she removed it, a black and white zebra-stripe print dress was revealed, split at one thigh.

On her cape, the legend of 'mother, champion, queen, goddess' was written in French.

"It was just to remind everyone that they can be champions and are queens. So I love that about it," she said of her 2019 dress and cape.

Lat year, Serena had caused a stir at the French Open with her Black Panther catsuit, which was subsequently banned.

Roland Garros chiefs had said that the outfit that Serena wore will not be accepted they also described the outfit as "going too far".

"You know, I have been dealing with a lot, and then I just got nervous out there and I stopped moving my feet.

"There were like concrete blocks on my feet. I was, like, 'You gotta do something'," said Serena.