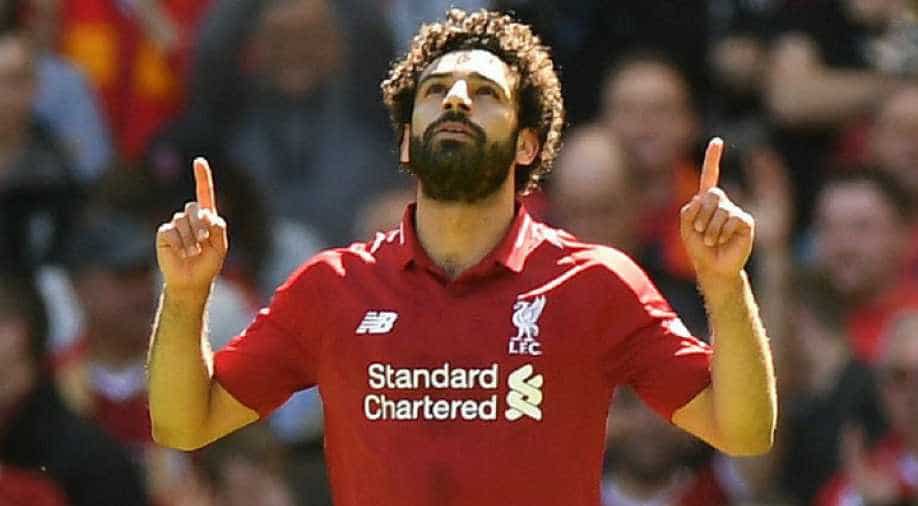 Mohamed&nbspSalah's clinical first-half strike against Brighton helped confirm Liverpool's presence in the Champions League next term, and also saw the Egyptian break the record for most goals scored in a 38-game Premier League season.

Brighton had no answers at a sun-kissed Anfield as&nbspSalah's sensational form continued with him scoring his 32nd league goal of the campaign.

Dejan Lovren and maiden Liverpool goals for Dominic Solanke and Andy Robertson ensured there was no final day collapse against an already safe Brighton side that simply could not cope with Liverpool's attack.

Before kick-off Jurgen Klopp's men had to forget about trying to win the Champions League in favour of just qualifying for the competition next season.

Upcoming events in Kiev were, understandably, on everybody's minds at Anfield, but a victory over Brighton was the immediate priority before focusing on the Champions League final against Real Madrid on May 26.

Liverpool had stumbled on the domestic front in recent weeks as their European adventure took its toll, allowing Chelsea an outside chance of pipping them to fourth in the table.

But it was the brilliantly entertaining football showcased by Liverpool throughout most of the season that was on show as&nbspSalah&nbspalso grabbed the golden boot for the Premier League's top scorer.

Brighton goalkeeper Matthew Ryan was then finally brought into action as he stood up well to block a close-range Sadio Mane effort.

Those missed opportunities raised Anfield's volume by several notches, but the stadium remained anxious until&nbspSalah&nbspbroke the deadlock after 26 minutes.

Salah&nbsppounced on a loose ball inside the area to comfortably beat Ryan and claim his 45th goal of the season overall. The finish also put him one goal ahead of Alan Shearer, Cristiano Ronaldo and Luis Suarez who had all previously scored 31 in a 38-game Premier League season.

Salah&nbspshould have had even more when, moments after his first, Mane ran through clear on goal and unselfishly squared for his team-mate but Ryan made a brave block before watching the rebound cleared off the line.

Georginio Wijnaldum and Roberto Firmino then both wasted a glorious opportunity apiece before Lovren showed the attackers how to do it, rising highest in a crammed penalty area to nod past Ryan and kill the contest off after just 40 minutes.

With Chelsea also losing 3-0 at Newcastle, the second-half had a more processional feel to it, helped enormously by Solanke's stunning finish after 53 minutes when he rifled into the roof of the net to open his Liverpool account.

Liverpool remained on the front foot and Ryan did well to deny Firmino as he looked to cap off another hard-working afternoon with a goal.

Robertson did get his first goal for the club by staying calm to thrash home a loose ball six minutes from time to add even more gloss to an afternoon of total dominance.

One European adventure for Liverpool is now guaranteed for next season all attention now turns to a far bigger one fast approaching on the horizon.

Indonesia stadium stampede: What do FIFA rules state about use of tear gas to control crowds?