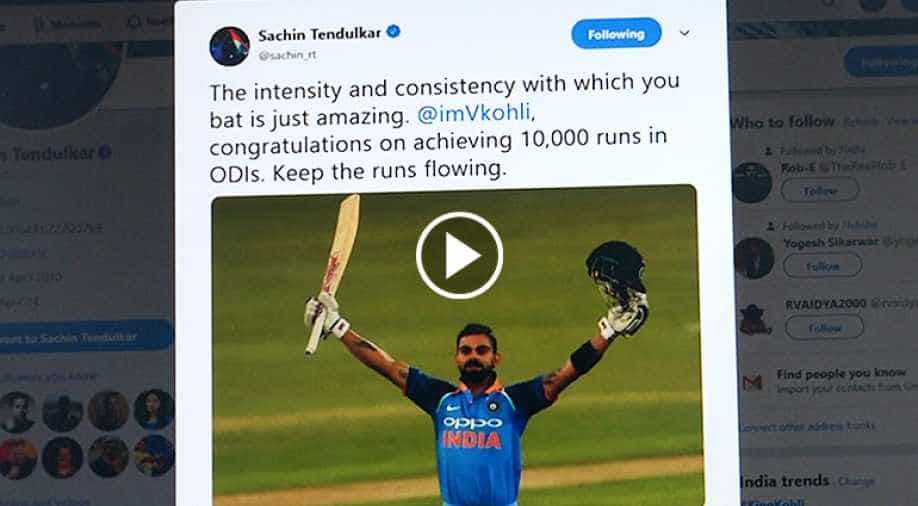 The Indian cricket team skipper breached the 10K-run mark in one-day internationals during the second ODI against the Windies in Visakhapatnam.

Virat Kohli on Wednesday become the fastest batsman to score 10,000 ODI runs – a feat he accomplished by breaking yet another Sachin Tendulkar record.

The Indian cricket team skipper breached the 10K-run mark in one-day internationals during the second ODI against the Windies on Wednesday in Visakhapatnam.

Kohli went past the milestone when he reached the score of 81. Later, he went on to post his 37th ODI century and eventually stayed unbeaten on 157 as India had put a target of 322 runs for the Jason Holder's side.

Moments after he achieved the feat, Twitter erupted in praise for the batsmen dubbing him 'King Kohli'.

Even the cricket fraternity, including Sachin Tendulkar, took to Twitter to congratulate the Kohli on his achievement.

The intensity and consistency with which you bat is just amazing. @imVkohli, congratulations on achieving 10,000 runs in ODIs. Keep the runs flowing. pic.twitter.com/tQUhY8bHna

Software update all the time. Virat Kohli has redefined what consistency means. Got his 9000th odi run just 11 innings ago and got his 10000 th today, to go with his 37th century. Enjoy the phenomena #KingKohli pic.twitter.com/OPhvIsBRDJ

And the insanity continues with an undying intensity. Congratulations #KingKohli on 10,000 ODI runs and 37th century. The hunger, consistency and intensity is simply incredible pic.twitter.com/DGoP1GlZ01

Another absolute masterclass from the India captain! @imvKohli passed 10,000 ODI runs in style with an exceptional 157* to propel his side to 321/6 against Windies in Vizag.

Despite such heroics from Kohli, India failed to beat West Indies in the 2nd ODI, after Shai Hope's gutsy hundred helped his side to end the game in a dramatic tie.