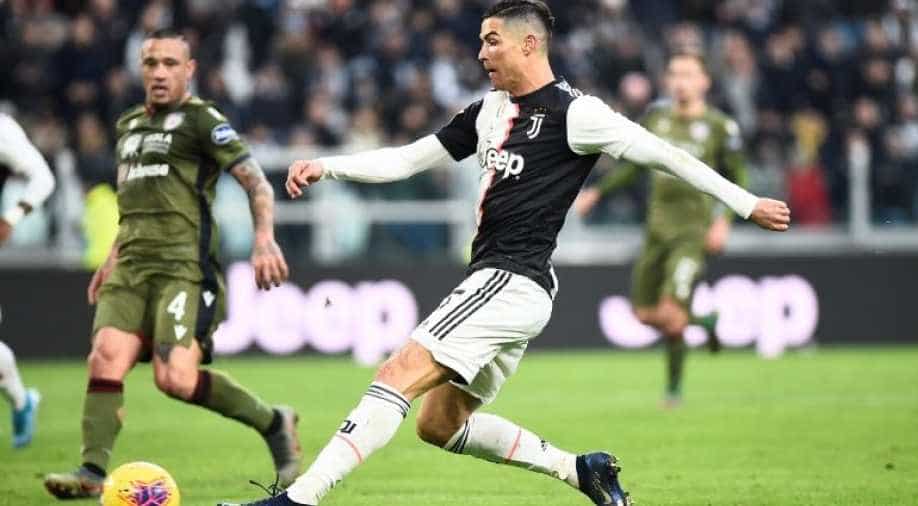 The defending Champions of the Serie A - Juventus - are at 45 points, the same as the current number one - Inter Milan, who have scored a higher goal difference.

Cristiano Ronaldo scored a second-half hat-trick to lead Serie A champions Juventus to a 4-0 win at home against Cagliari on Monday, taking his tally to eight goals in his last five league games.

The Portuguese pounced on a mistake in the Cagliari defence to break the deadlock four minutes after halftime before adding the second from a penalty as he scored for the fifth league game in the row.

After setting up Gonzalo Higuain for the third in the 81st minute, he completed the rout by finishing off a counter-attack one minute later.

The win left Juventus top of Serie A with 45 points from 18 games, at least until Inter Milan, who are three points behind, visit Napoli in the evening match.

Ronaldo, who completed the 36th league hat-trick of his career, two more than Lionel Messi, took his tally this season to 15 goals, including 13 in Serie A.

Sixth-placed Cagliari defended stubbornly in the first half, restricting Juventus to one real chance when defender Merih Demiral's header thumped against the crossbar from a corner.

But it began to unravel for the Sardinians when Ragnar Klavan's pass across the face of the Cagliari area was intercepted by Ronaldo who glided past goalkeeper Robin Olsen and scored into the empty net.

Giovanni Simeone headed against the crossbar for Cagliari but they were undone by more careless defending when Marko Rog tripped Paulo Dybala as he weaved his way into the area and Ronaldo sent Olsen the wrong way from the spot.

With nine minutes left, Ronaldo sent substitute Higuain free down the left and the Argentine cut inside before scoring with a deflected shot.

One minute later, Douglas Costa burst forward and slipped the ball to an unmarked Ronaldo who placed his shot between Olsen and the near post.

Cagliari then hit the woodwork for a second time as Joao Pedro struck the post.