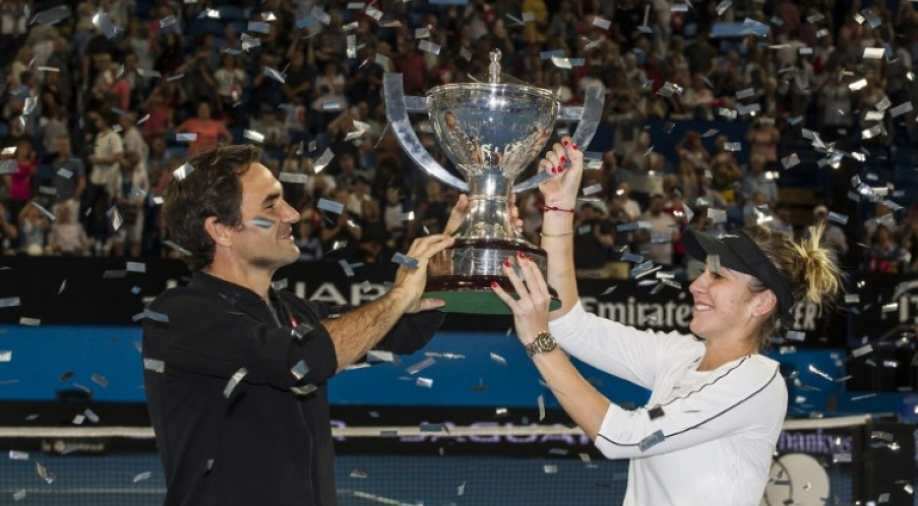 For the second year in a row, the Swiss beat the German pairing of Alexander Zverev and Angelique Kerber by claiming a deciding mixed doubles rubber which was loaded with drama.

Roger Federer became the most successful player in Hopman Cup history when he led Switzerland to a 2-1 win in an enthralling final of the mixed teams tournament in Perth Saturday.

In what is tipped to be the final edition of the unique tournament, the best was saved for last as Federer became the first player to win three Hopman Cups, teaming with Belinda Bencic to make it successive titles in Perth.

For the second year in a row, the Swiss beat the German pairing of Alexander Zverev and Angelique Kerber by claiming a deciding mixed doubles rubber which was loaded with drama.

It was Switzerland's fourth title overall, behind only the United States with six, and Federer first won the Hopman Cup back in 2001 when he teamed with Martina Hingis.

The 37-year-old gave the Swiss the early ascendancy with a straight sets win against Zverev, before Kerber squared the tie by beating a dogged Bencic to set up the mixed doubles decider.

Federer was a dominant figure in an extraordinary doubles match as the Swiss claimed the abbreviated format 4-0, 1-4, 4-3 (5/4) to clinch the title despite Germany having two match points.

Fittingly, it was Federer who served out the match in the third set tie-break, having been unable to do so earlier in the set.

The tournament came down to a single point at 4-4 in the third set tie-break, with both teams holding match point and after an extended rally Zverev dumped a backhand into the net to hand the Swiss victory.

Federer also became the first player to win successive Hopman Cups and said the records were a nice bonus for winning the title.

"I am very happy for these records, although I didn’t come here for that," he said.

"Winning it back-to-back years, what a thrill it was, not just the match point but the whole week."

Zverev and Kerber were despondent after the loss and the former said it was a tough pill to swallow.

"We really wanted to win as a team," Zverev said.

In the men's singles, Federer bounced back from a November loss to Zverev in London to beat the big-serving German 6-4, 6-2 and make it a clean sweep of his singles matches in Perth for the second year running, less than two weeks before he defends his Australian Open title.

It was a high-octane match, with plenty of big serves and clean winners, but Federer was able to answer everything the 21-year-old threw at him.

He broke Zverev in the 10th game of the first set and then tightened the noose on the German, with two more breaks in the second set.

He was pleased to maintain his unbeaten singles record during the week, during which he never dropped his serve.

World number two Kerber appeared set for an easy win in her singles match against Bencic, taking the first set and then claiming an early break in the second.

The German served for the match at 5-4, but the match took a dramatic twist as Bencic broke back, only for Kerber to immediately break again.

For a second time Kerber was unable to serve out the match, as Bencic forced it to a tie-break.

Kerber had two match points at 6-4 in the tie-break, but Bencic again hung on grimly and won the next two points.

Critical to the result was Kerber's ability to convert all four of her break points during the match, while Bencic was only successful on two of seven.