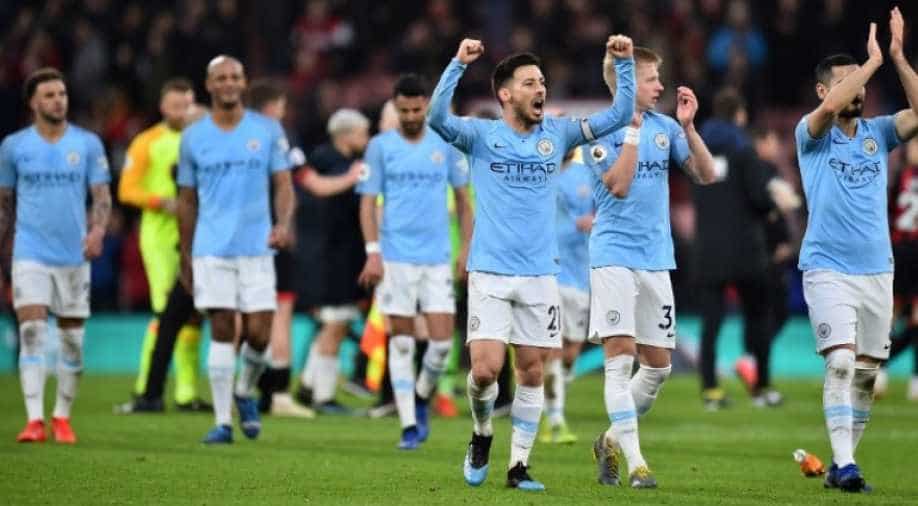 Coach Guardiola celebrated this vital three points with his players on the pitch after the final whistle.

Manchester City struck the latest blow in the Premier League title race as they moved above Liverpool to the top of the table after Riyad Mahrez secured a 1-0 victory at Bournemouth on Saturday.

City climbed two points clear of Liverpool, increasing the pressure on their title rivals before Jurgen Klopp's side face Everton in the Merseyside derby on Sunday.

After the single-goal victory against West Ham in midweek, City manager Guardiola could again be satisfied with the way his side stuck to their task to deliver the result they needed at Dean Court.

And the way Guardiola celebrated this vital three points with his players on the pitch after the final whistle spoke volumes.

Mahrez's contribution was also timely after the Algeria winger had been widely criticised for his display against West Ham, when he was withdrawn after just 55 minutes following his first league start since December 30.

There have already been suggestions the 28-year-old might move on just 12 months after his £60-million ($79.26 million) arrival from Leicester, but his second-half winner will undoubtedly lift his confidence ahead of the remaining weeks of the season.

City's victory came at the cost of an injury to Kevin De Bruyne, who was withdrawn after appearing to pick up a hamstring immediately before half-time.

John Stones also left the field early in the second half and Guardiola will hope both players are not sidelined for long, with Fernandinho and Aymeric Laporte already out of action.

That was due in part to the protection given to Boruc by his defenders, who held their concentration and stuck to their task impressively in the face of sustained City pressure.

Sergio Aguero was largely denied a clear sight of goal before the interval and it was Nicolas Otamendi who came closest when he met De Bruyne's corner with an acrobatic volley that flew narrowly over.

De Bruyne's departure added to City's first-half frustrations but Mahrez, the Belgian's replacement, quickly made an impact, delivering a corner that was diverted goalwards by Bournemouth's Chris Mepham, forcing Boruc to save from close-range.

City were never likely to change their approach significantly despite their unproductive first-half efforts.

And after starting the second half in exactly the same way as they saw out the first, they took full advantage when Bournemouth finally cracked and allowed Mahrez enough room to fire past Boruc in the 55th minute.

The build-up to the goal was like so many of City's previous moves, with the ball being worked quickly across the face of the home goal, where David Silva eventually helped it on to Mahrez.

Positioned beyond the far post, the Algerian pulled away from Charlie Daniels and had the time to steady himself before beating Boruc at the near post.

From that moment, the outcome of the game was effectively decided.

Bournemouth had offered few signs of being able to trouble City and, exhausted by their defensive efforts, they lacked the energy to mount a response.

City could have added to their tally but for a series of fine saves from Boruc.

IPL 2021: Miller and Morris steal the show in Wankhede as Rajasthan beat Delhi