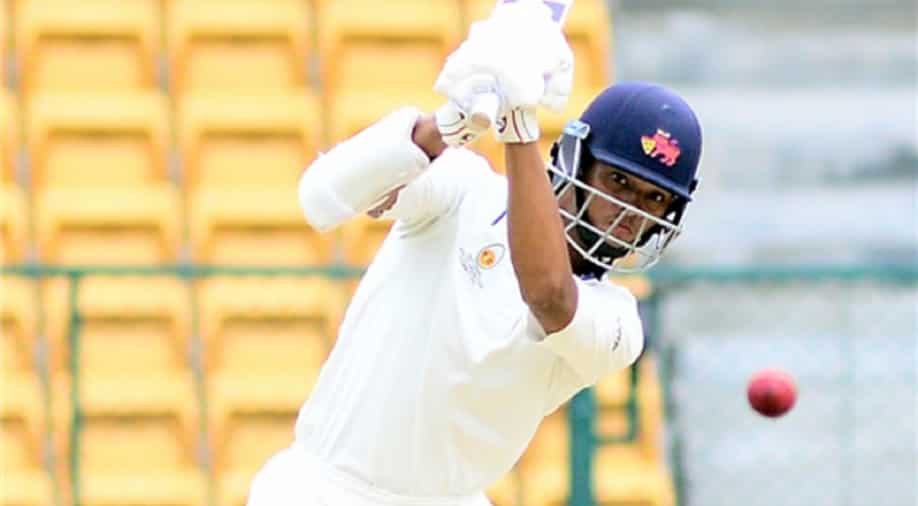 Yashasvi Jaiswal continued his fine form and scored 78 while captain Prithvi Shaw notched up 47 runs to help Mumbai post 248/5 on Day 1 of the ongoing Ranji Trophy final against Madhya Pradesh on Wednesday (June 22).

An unheralded bunch of Madhya Pradesh bowlers stuck to its plans as a star-studded Mumbai side toiled its way to 248 for five on the first day of the Ranji Trophy final here. Despite an opening stand of 87 between Prithvi Shaw (47, 79 balls) and Yashasvi Jaiswal (78, 163 balls), Mumbai failed to drive home the advantage on a pitch that wasn't conducive for strokeplay.

A 400-plus first-innings total will now depend on the season's highest run-getter Sarfaraz Khan (40 batting, 125 balls), who is looking good for another big knock with the dependable Shams Mulani (12 batting, 43 balls) giving him company.

While left-arm spinner Kumar Kartikeya was the tireless operator from one end, having sent down 31 overs for figures of 1 for 91, seamer Gaurav Yadav (23-5-68-0) was distinctly unlucky and the wickets column don't reflect the relentless pressure that he put on Mumbai batters, especially skipper Shaw.

In fact, it was the pressure applied by Yadav which helped nippy seamer Anubhav Agarwal (19-3-56-2) and tall off-spinner Saransh Jain (17-2-31-2) to share the bulk of the spoils, with some intelligent execution of plans.

Mumbai did enjoy the advantage during the first hour after Shaw opted to bat and, along with Jaiswal, took on the MP attack. The strategy to start with Kartikeya's slow left-arm orthodox seemed to have backfired when Jaiswal took him on and lofted him over long-on for a six.

Shaw followed suit and hit Kartikeya over long-off for a six as they added 87 for the first wicket. But while Jaiswal, with his drives and upper cuts, looked to continue from where he left in the semi-final, Shaw, despite his seven fours (at least three of them behind square) looked edgy.

Both the seamers, Anubhav and Gaurav, got some movement in the air with a nice cloud cover helping their cause. They also hit the perfect length with movement off the pitch in both directions, into and away from the batter. Both look run-of-the-mill medium pacers but are deceptively quicker than they actually look.

In fact, the best over of the first day was the 12th of the Mumbai innings when Gaurav first cut Shaw into half with a massive in-cutter and then bowled the outgoing deliveries, beating the bat as many as five times in six balls.
By the end of the over, he was in his hunches.

Jaiswal, at the other end, scored his first 30 runs in 52 balls, but then, gauging the two-paced nature of the pitch, started playing more cautiously. His next 48 runs came in another 111 deliveries. The first breakthrough came minutes before lunch break when Anubhav, who was bowling closer to the stumps, decided to move slightly wide and fired in a couple of deliveries with the angle.

While Shaw managed to defend one, the second delivery saw him play across the line and the stumps rattled.
Arman Jaffer (26 off 56 balls) looked solid till he tried a forward-defensive jab off Kartikeya, without factoring in the extra bounce, and the ball took an inside edge off his bat and Yash Dubey, at short mid-wicket, completed a diving catch.

Also Read: 'This has happened because of him': Ex-Pakistan captain blames Ravi Shastri for Virat Kohli's poor form

The pitch in the second session slowed down considerably and Suved Parkar (18) paid the price when a delivery from Saransh stopped on him and the leading edge off closed bat face just lobbed up for the easiest of catches for rival captain Aditya Shrivastava.

The dismissal that was most well-planned was that of Jaiswal, who was closing in on a fourth hundred of the season.
Anubhav, who had started operating wide of the crease, started cramping the left-hander for room. As he was finding it difficult to get the boundaries, Jaiswal, without much room, tried the square cut but failed to keep it down and Dubey at gully took a sharp low catch.

Hardik Tamore (24) was living dangerously till Saransh got some drift and the delivery straightened after pitching, taking the outside edge into Rajat Patidar's hands in the first slip.