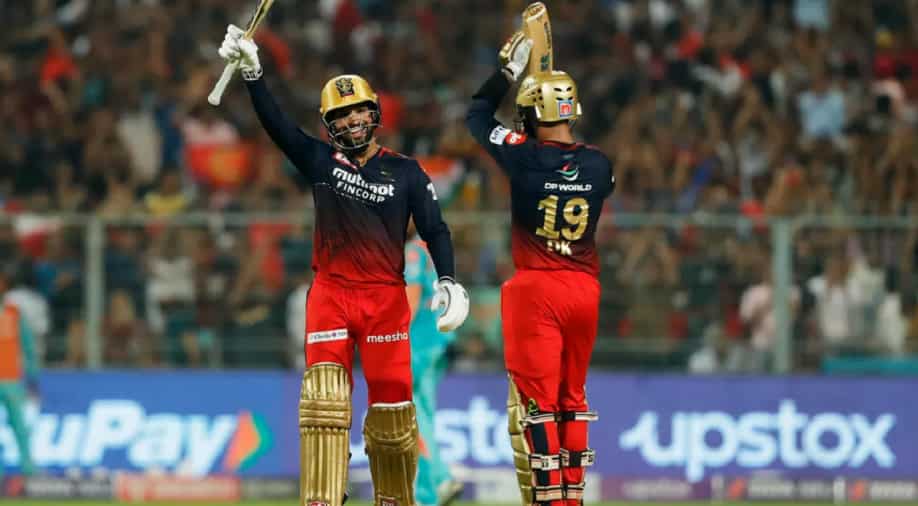 Rajat Patidar and Josh Hazlewood turned out to be the game-changers for Royal Challengers Bangalore (RCB) as the Faf du Plessis-led side beat Lucknow Super Giants by 14 runs in the Eliminator at the Eden Gardens on Thursday.

Royal Challengers Bangalore (RCB) moved one step closer to securing a spot in the final of the Indian Premier League (IPL) 2022 as the Faf du Plessis-led side defeated Luckow Super Giants (LSG) by 14 runs in the Eliminator at the Eden Gardens in Kolkata on Wednesday (May 26). Rajat Patidar was the star with the bat for RCB as he slammed his maiden IPL ton to power the team to a match-winning total of 208 runs before Josh Hazlewood and Harshal Patel helped their side close out the game comfortably.

Asked to bat first at the Eden Gardens, RCB didn't get off the best possible start as they lost skipper Faf du Plessis on a duck in the very first over. However, Patidar arrived in the middle at number three and went on to play the knock of his life to help his team bounce back strongly. Patidar went after the LSG bowlers from the word go and completed his stunning maiden IPL ton off just 49 balls.

He added a crucial partnership of 66 runs for the second wicket with Virat Kohli (25) before adding a superb unbeaten stand of 92 runs for the fifth wicket with Dinesh Karthik, who played a sensational cameo of 23-ball 37 to help RCB finish strongly. Patidar scored an unbeaten 112 off just 54 balls laced with 12 fours and 7 sixes to take the LSG bowlers to the cleaners.

RCB bowlers would have backed themselves to defend the total of 208 runs comfortably but with dew coming into play and the track helping the batters immensely, it took a lot of hard work from the bowlers to stop the LSG batters from achieving the target.

It wasn't an ideal start for LSG in their run chase as opener Quinton de Kock departed after scoring just 6 off 5 balls before Manan Vohra, who came in at 3 was also dismissed cheaply on 19 off 11 balls. Skipper KL Rahul acted as glue in LSG's batting line-up and held the crease from one end with a gritty 79 off 58 balls.

However, he failed to find support from the other end after Deepak Hooda's departure in the 15th over. Rahul and Hooda added a brilliant partnership of 96 runs for the third wicket to keep LSG in the run chase but their batting line-up crumbled under pressure after Hooda's departure.

Also Read: 'He will be around for a long time': BCCI president Sourav Ganguly reacts to Umran Malik's rise in IPL 2022

While Marcus Stoinis clearly struggled in the middle and could only manage 9 off 9 balls, Evin Lewis couldn't do much after being sent out to bat at number 6 as he returned not out on 2 off 6 balls. LSG  will ruse the missed opportunities on the field during RCB's innings and would have hoped for a better show from their middle-order in the crucial encunter.

RCB will now face Rajasthan Royals in the Qualifier 2 for a place in the final against Gujarat Titans. RCB and Rajasthan Royals will lock horns in the second Qualifier on Friday (May 28) at the Narendra Modi Stadium in Ahmedabad. The winner will take on GT in the summit clash.