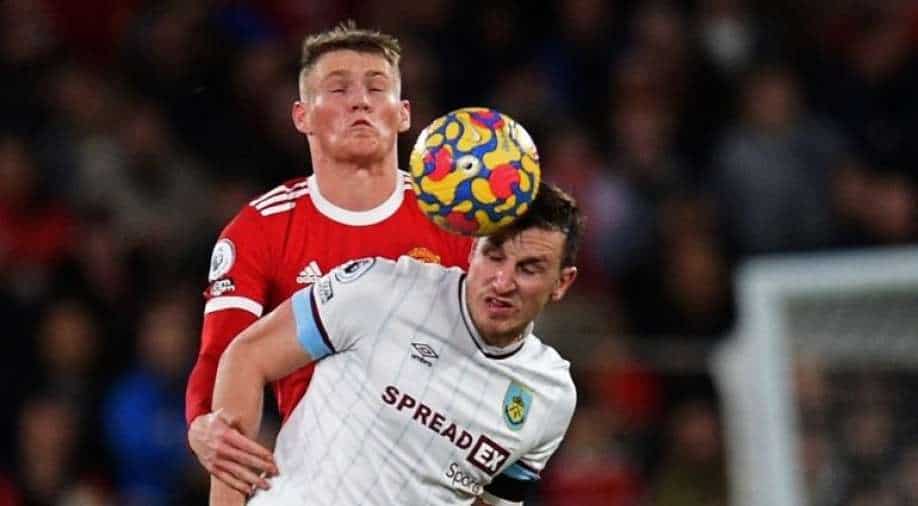 United went above Tottenham Hotspur to the sixth position, tied on 31 points with fifth-placed West Ham United. Burnley is still in 18th place with 11 points.

Manchester United climbed up to sixth in the Premier League with a 3-1 victory against struggling Burnley at Old Trafford on Thursday, keeping their undefeated run under interim manager Ralf Rangnick intact.

United went above Tottenham Hotspur to the sixth position, tied on 31 points with fifth-placed West Ham United. Burnley is still in 18th place with 11 points.

Rangnick made six changes to his team following Monday's 1-1 draw against Newcastle, with Edinson Cavani starting in attack alongside Cristiano Ronaldo.

Burnley, who had their last three games postponed due to COVID-19 instances among their opponents, were hit by four positives of their own, including goalkeeper Nick Pope, while crucial attacker Maxwel Cornet was ruled out due to injury.

The game's open nature was obvious from the start, with Chris Wood losing an early chance, headed wide for the visitors, and then Ronaldo wasting a great opportunity, hitting over the bar when clear on goal.

Mason Greenwood's cross to Ronaldo was misjudged, but Scott McTominay grabbed on the loose ball and fired a low drive through the congested area and into the bottom corner.

As United's confidence rose, Luke Shaw surged through the heart of the Burnley defence but sent his attempt into the side netting.

After a mix-up in the Burnley defence, Jadon Sancho cut through from the left and his low shot deflected off the outstretched foot of Burnley skipper Ben Mee and past Wayne Hennessey.

United, who were using an offensive 4-4-2 shape, were giving space for Burnley to exploit and appeared vulnerable at the back, but their optimistic attitude paid off when they scored the third goal in the 35th minute.

Hennessey deflected a powerful McTominay effort against the post, but the ball went straight to Ronaldo, who guided it into the unguarded goal.

That seemed like the end of the game, but Burnley hung on courtesy to a great solo effort from Aaron Lennon, the former Tottenham Hotspur winger taking advantage of a weak touch from Eric Bailly, cutting into the United area, and beating David De Gea with a well-placed angled strike.

After the interval, Hennessey did well to keep out attempts from Greenwood and Cavani, while Burnley's opportunities were confined to headers from James Tarkowski at set-pieces.

Rangnick was particularly delighted with the aggressive effort in the first half.

"The whole team performance was a lot better, I was pleased with the performances of our wingers. Jadon did well and Mason. Edi (Cavani) and Cristiano, the work effort was amazing," he said.

The German claimed he still needed to work on his defence but that "physically and energetically it was a good performance."

"For us it's about taking next development steps therefore it was important for us to win this game today," he said. "Now we've gone eight games in a row without a defeat and since I arrived we have three wins and one draw (in the league), which is OK, we've got enough points."